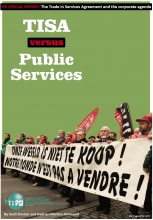 A new report by Public Services International (PSI) warns that governments are planning to take the world on a liberalisation spree on a scale never seen before. According to the report, this massive trade deal will put public healthcare, broadcasting, water, transport and other services at risk. The proposed deal could make it impossible for future governments to restore public services to public control, even in cases where private service delivery has failed. It would also restrict a government’s ability to regulate key sectors including financial, energy, telecommunications and cross-border data flows.

Treating public services as commodities for trade creates a fundamental misconception of public services. The Trades in Services Agreement (TISA), currently being negotiated in secret and outside of World Trade Organization rules, is a deliberate attempt to privilege the profits of the richest corporations and countries in the world over those who have the greatest needs.

Public services are designed to provide vital social and economic necessities – such as health care and education – affordably, universally and on the basis of need. Public services exist because markets will not produce these outcomes. Further, public services are fundamental to ensure fair competition for business, and effective regulation to avoid environmental, social and economic disasters – such as the global financial crisis and global warming. Trade agreements consciously promote commercialisation and define goods and services in terms of their ability to be exploited for profit by global corporations. Even the most ardent supporters of trade agreements admit that there are winners and losers in this rigged game.

The winners are usually powerful countries who are able to assert their power, multinational corporations who are best placed to exploit new access to markets, and wealthy consumers who can afford expensive foreign imports. The losers tend to be workers who face job losses and downward pressure on wages, users of public services and local small businesses which cannot compete with multinational corporations.