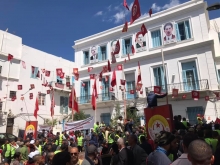 Two thousand municipal workers from Tunisia’s waste management services gathered on April 28th, World Day for Safety and Health at Work, to demand safe and healthy working conditions, adequate personal protective equipment for all, and the recognition of their professional status at national level.

Two thousand municipal waste management workers from all provinces of Tunisia responded to a call from the municipal branch of the Tunisian General Workers’ Union (Union Générale des Travailleurs de Tunisie – UGTT) and marched down the historic Avenue Habib Bourguiba on April 28th, World Day for Safety and Health at Work. The workers were demonstrating to demand safe and healthy working conditions, adequate protective gear for all, and the recognition of their professional status at national level.

Video of the demonstration

The 28th April demonstration was the culmination of a two-day information and awareness-raising event, the First Mediterranean Forum on Working Conditions. The event was organized by the municipal workers’ branch of the UGTT and the French federation CFDT Interco, with participation from PSI, with a view to cooperation between unions in the Western Mediterranean countries, in line with Resolution 45 of PSI’s 2017 Congress. As part of the event, a symposium on municipal workers’ conditions was held which was attended by more than 70 people, including Tunisian workers and trade union activists, Tunisian and international experts on occupational health and safety, institutional representatives from Tunisia, and UGTT municipal workers’ branch officials from all 24 of the country’s regions. 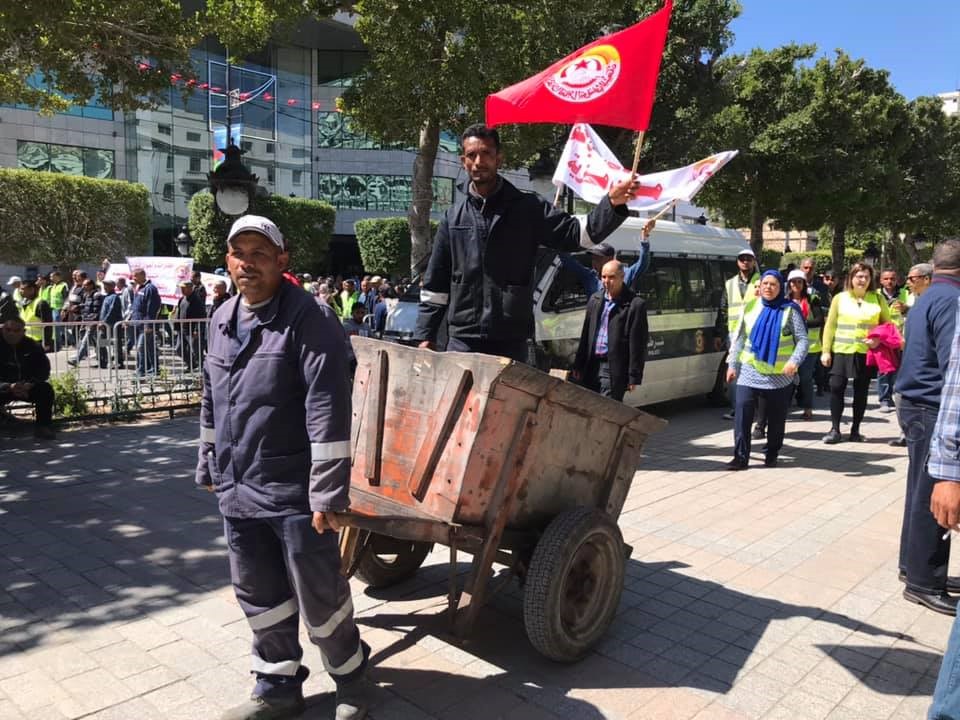 In a striking video produced and shown by the UGTT at the symposium, workers were seen collecting, transporting and amassing unsorted waste (medical, metal, glass, household and organic waste, and electronic and chemical waste, all mixed together), often without gloves or masks, and in conditions posing a severe risk to their health.

Reacting to the video and opening the symposium, Mr. Mondher Bousnina, President of the High Authority for Local Authorities, representing the Tunisian Ministry of Local Affairs and the Environment, acknowledged the serious problems this sector faces in Tunisia. He emphasized the urgent need to identify the risks and shortcomings of the system, in cooperation with the workers’ representatives, and then tackle them with a view to improving working and service conditions. In his address, he also emphasized the importance of public education concerning the need to reduce waste and manage it sustainably.

“If the country wants to be clean, responsibility must be shared among all groups, and citizens must also play their part. Municipal personnel work hard, but all too often, we do not see them”, he said. “We will work together and establish a joint work plan in order to introduce a circular system”, he concluded. 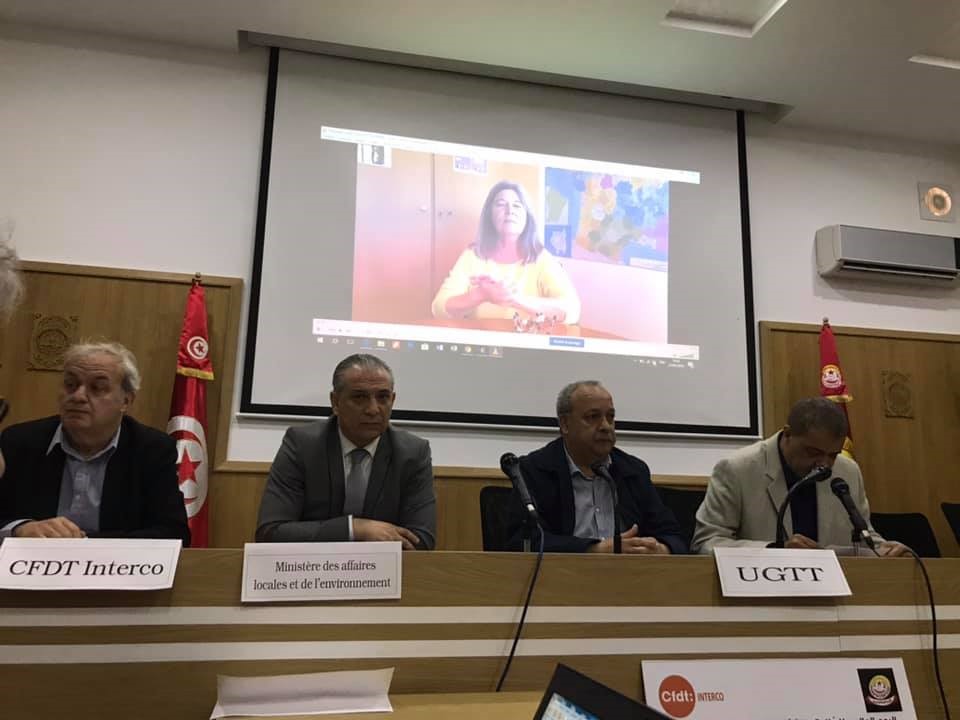 The Mayor of the city of La Goulette, who also attended the symposium, praised the “colossal work” of the municipal personnel for the well-being of citizens and municipalities, and stressed that action was vital to improve and promote service conditions and quality, focusing in particular on achieving a scientific definition of the profession’s tasks, training and occupational health and safety programs, and medical monitoring.

“We will develop these ideas by setting up a working committee with all the social partners in order to achieve better municipal waste management for all.” 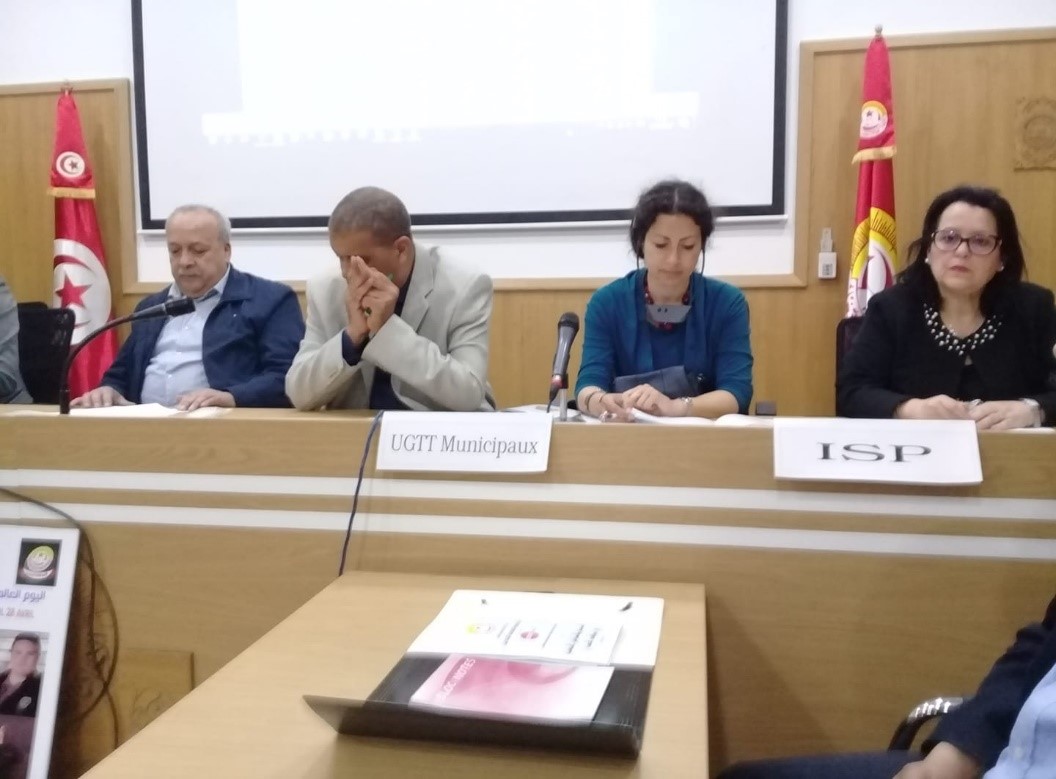 The day after the demonstration, on April 29th, 2019, Makrem Amairia, General Secretary of the UGTT municipal workers’ branch, filed an official request with the Tunisian Ministry of Labor for a draft law recognizing the municipal workers’ profession.

“Municipal personnel work hard to ensure the cleanliness and safety of public spaces in Tunisia, with insufficient resources and to the detriment of their own health. The UGTT calls for urgent action from the national government and mayors to provide high-quality personal protective equipment for all, as well as the resources that personnel need to do their work properly. We also demand that these workers should finally be recognized for their fundamental role in protecting the country’s public health and environment”, he stated. 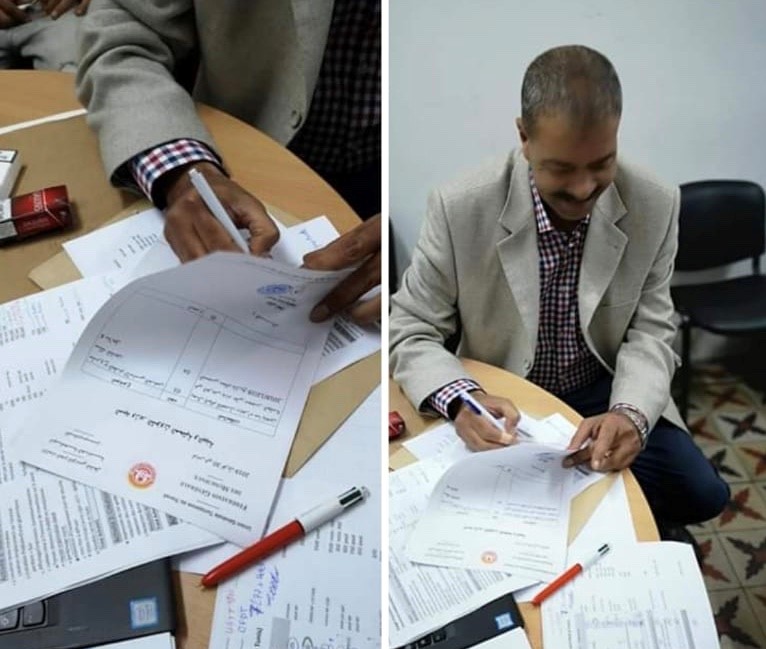 Acceptance of the official status would represent an important step towards improving the working conditions of all Tunisian municipal workers. It would lead to improvements in the organization of workers’ careers, including promotions for kindergarten assistants, access to the right to continuing training and the introduction of new allowances (a risk premium, a waste collection premium, etc.). It would also make it possible to set up a national joint committee on occupational health and safety, and facilitate efforts to improve coordination between elected municipal councilors and administrative officials.

As far as waste management is concerned, the responsibility for and financing of this essential service in Tunisia mainly rest with the municipalities, which spend between 70 and 100% of their resources on collection and transportation to landfill alone. Urban areas are the best served (80%), whereas just 10% of rural areas are covered[1]. 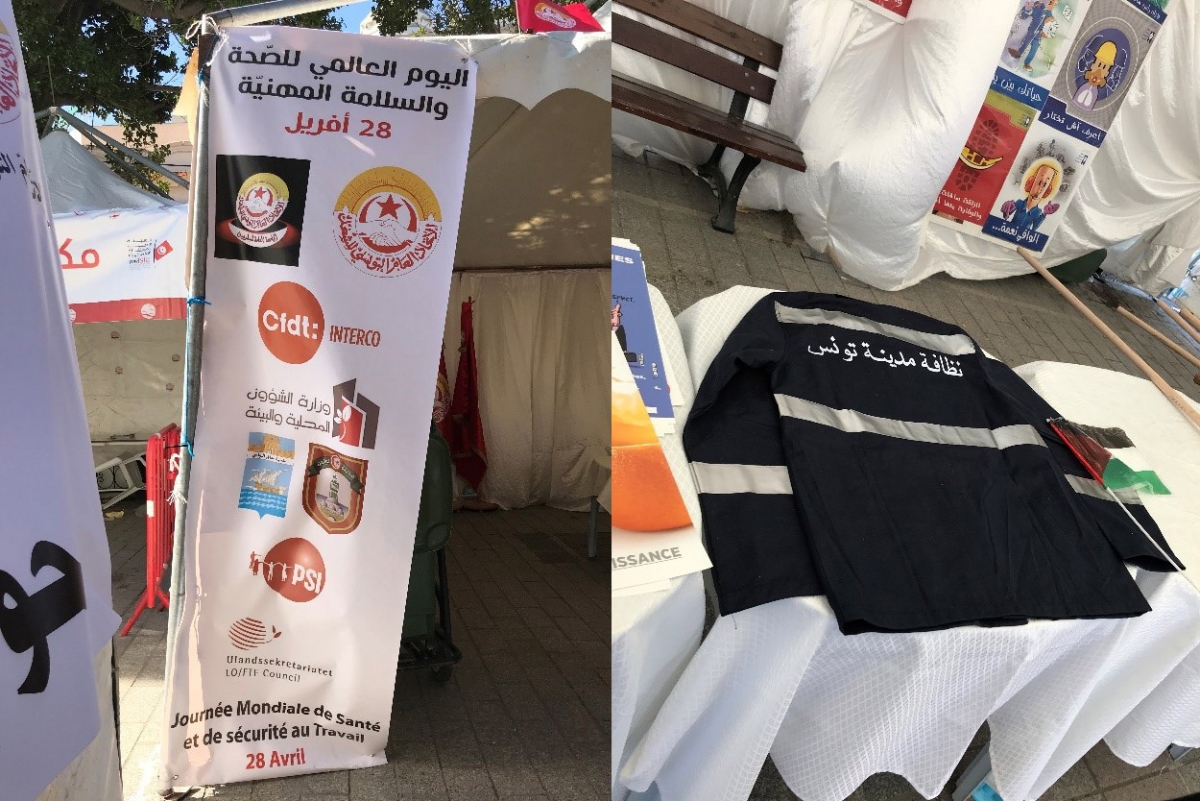 In Tunisia, the infrastructure at landfill sites such as Borj Chakir  is antiquated. Some such sites still date from the colonial era, while several waste disposal centers are illicit and unsupervised. Although Tunisia is a signatory to several international commitments and has advanced laws on sustainable waste management and selective sorting, these laws are generally not enforced.

On the weekend of April 28th, an information and awareness-raising stand was set up by the unions on Av. Habib Bourguiba to tell Tunisian citizens, users and local and national elected officials about the difficult conditions faced by municipal workers, including the many dangers they face on a daily basis, especially in the fields of waste collection and management. On the evening of Saturday, April 27th, to mark World Day for Safety and Health at Work, a theater and dance performance was given at the stand in order to draw attention to municipal workers.

One of the objectives and outcomes of the symposium was also the finalization of a practical guide on health and safety at work for Tunisian municipal workers, to be published and distributed during 2019.