PSI at the 7th Global Forum on Migration and Development

This was the key message of PSI General Secretary Rosa Pavanelli in addressing delegates of the 7th Global Forum on Migration and Development, which takes place on 14-16 May in Stockholm, Sweden. An estimated 900 delegates representing governments, civil society, international organizations and experts are participating in the forum. The high level global meeting was keynoted by UN Secretary General Ban Ki Moon. 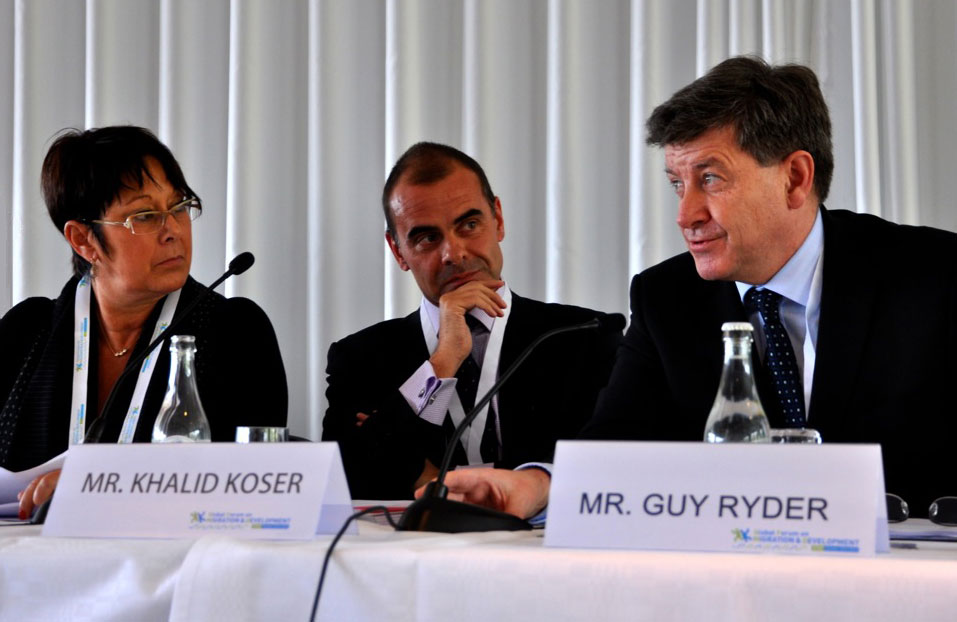 Pavanelli addressed the Common Space Panel session on Labour Migration where delegates were looking at the question of partnerships in realising decent labour migration and decent employment. Among the speakers in the panel were Guy Ryder, Director General of the International Labour Organisation and representatives of the Government of Canada and Sri Lanka, as well as the organizations of employers and business.

In speaking on behalf of PSI and the Global Unions, Pavanelli welcomed the creation of a wider Common Space between governments and civil society, where trade unions are recognised for their role in representing workers’ rights. It was the first time in the global forum where social partners were invited to discuss the issue of labour migration along with the governments in a format of dialogue.

Ninety per cent of the estimated 232 million international migrants today are workers, bringing labour migration as a key issue in the global debate on migration and development. Another key issue in the forum is the examination of migration in the on-going debate towards a new post-2015 UN Development Agenda.

Pavanelli stressed three key issues that are important for the trade union movement in the global forum.

First, is that human rights are central in any discussion on labour migration. The ILO Conventions on Migrant Workers C97 and C143 and the UN Migrant Workers Convention provide a comprehensive framework for a rights-based labour migration. Other instruments such as the ILO Domestic Workers Convention and the UN Committee on the Elimination of Discrimination Against Women (CEDAW) General Recommendation No. 26 also provide standards in reducing vulnerabilities of women migrants and promoting their rights and empowerment. Pavanelli urgently called on governments to take responsibility in ratifying and implementing these conventions. Trade unions, working with civil society, are committed to vigorously continue our efforts in organising migrant workers, defending their rights and monitoring accountability of states on these rights, including addressing the abusive practices in the labour recruitment industry.

Second, is that, we need a new development agenda. The post-2015 process is the opportunity to learn from the failures of the current economic model. A paradigm shift is needed towards a new holistic pro-people and sustainable development. The debate on migration and development must focus on the creation of decent jobs in both countries of origin and destination. Migrant workers cannot be seen as the panacea to fill labour market shortages, respond to demographic changes or be treated like a commodity in trade agreements, i.e. strategies  to curb the cost of labour. Addressing the root causes of migration is critical. States must take the primarily responsibility to create decent work, provide quality public services and social protection through public funding and fair taxation. In view of the post-2015 Agenda, migration is a cross-cutting issue that should be integrated in three development goals towards full employment and decent work, universal social protection and gender equality.

And thirdly, a strong multilateral governance framework is needed in the governance of international migration in order to achieve coherence and effective application human rights norms and standards. The declaration from the UN High Level Dialogue to promote migrants’ rights, develop an inclusive development agenda and improve multilateral governance must be realised. In the governance of labour migration, the ILO’s tripartite structure and standards-setting function are critical in addressing migrant workers’ rights, along with enhancing tripartism and social dialogue, in partnership with civil society and other stakeholders.