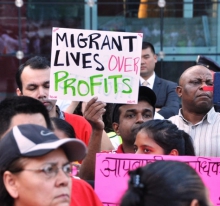 On 7 April 2014, Public Services International General Secretary Rosa Pavanelli addressed the Treaty Body of the United Nations’ International Convention on the Protection of the Rights of All Migrant Workers and Members of Their Families, during the Day of General Discussion on the theme of “Workplace Exploitation and Workplace Protection.” The event was held during the 20th Session of the UN Committee on Migrant Workers (Treaty Body) in Geneva and on the occasion of the 10th year of the entry into force of the UN Convention.

Other speakers in the panel included the UN Special Rapporteur on the Human Rights of Migrants, Prof. Francois Crépeau, the Deputy High Commissioner for Human Rights, Ms. Flavia Pansieri, the Chief of the ILO MIGRANT Branch, Michelle Leighton and representatives from non-governmental organizations and migrant associations.

Speaking on behalf of PSI and the Global Union Federations, Pavanelli welcomed the Day of General Discussion, emphasizing that the core issues of workplace exploitation and workplace protection for migrant workers cannot be tackled effectively other than within the international human and labour rights framework of the United Nations system. The work of the UN Treaty Bodies, together with governments, employers, trade unions and civil society, including migrants themselves and their communities, is critical in propagating the Conventions and bringing them into effect.

In her intervention, Pavanelli focused on three key concerns and key priorities.

“The first key concern is that workers’ rights are central in dealing with international migration,” Pavanelli says. Of the 232 million international migrants today, 90 per cent leave home in search of work. This is a considerable volume vis-à-vis the total global migration flows. “Despite their well-documented positive contributions to societies, migrant workers are victims of discrimination, abuses and violations of their rights. Inequality, xenophobia, exploitation, forced labour and human trafficking are on the rise,” says Pavanelli. “Women migrants, who make up nearly fifty per cent of international migrants, are often placed in this chain of abuse.

Migrant domestic workers, seasonal workers, temporary migrant workers, including those in circular migration schemes, and undocumented migrant workers, are amongst the most vulnerable groups of workers, whose rights are often ignored or violated,” she adds.

“The second concern is that recruitment conditions are critical in ensuring sound migration and employment outcomes for migrant workers,” says Pavanelli. Labour recruiters, brokers and middlemen are responsible for a wide range of human rights violations. Too often migrant workers find themselves effectively bonded to recruitment agents, through having to pay back extortionate “fees”, contrary to international labour standards. Migrant workers are promised one job by recruiters, but end up in another. They end up in precarious working and living conditions and have no access to social dialogue or collective action to improve their situation. Various self-regulation schemes have not worked to regulate the murky practices of the international labour recruitment industry.

“Reforming the labour recruitment industry requires good governance and transparency and a much larger role for public authorities and agencies. Governments must not sub-contract their human rights obligations to private firms. Binding legal frameworks, based on UN and ILO Conventions, are necessary,” stresses Pavanelli.

“The third concern is that labour migration needs to be addressed in a holistic manner, with full consideration of human rights and sustainable, social and economic development,” says Pavanelli. “The bulk of migration today is a symptom of uneven development, exacerbated by unfair tax, trade and economic policies, including policies on austerity, which fail to address poverty and inequality. Reduced public funding have led to loss of jobs, worsening working conditions and cuts in public services, such as health, education and social services that are necessary for the well-being of the population. Migrant workers, including women, children and young workers, are disproportionately affected,” she adds.

Pavanelli also mentioned how trade and economic agreements that promote aggressive privatisation and purely market-driven labour migration are treating migrant workers as commodities rather than as human beings with inalienable rights. This is where the chain of abuses continues.

Having elaborated on the key concerns, Pavanelli then highlighted a number of key priorities for action that governments, employers, trade unions and civil society could promote.

“First and foremost is the need for sound and coherent policies, addressing not only migration but sustainable human, social and economic development for all people. The UN Migrant Workers Convention calls for the “promotion of sound, equitable, humane and lawful conditions in connection with international migration. State parties must deliver on these obligations,” she says.

Pavanelli recalled how the tragic case last of migrants drowning in Lampedusa is only one dramatic example of the realities that face migrants in the different regions of the world. She challenged governments to embark on policies and cooperation measures that not only address the conditions with which migrant workers and their families migrate, but also the root causes of why people migrate. “Policies towards sustainable human, social and economic development, including respect of rights, access to decent work and quality public services are important in order to allow for the right of people ‘not to migrate’, Pavanelli stresses.

Pavanelli also added that governments can help mitigate racism and xenophobia by reducing emphasis on the security issue and funding of security programmes. Instead they should focus their investments on public policies and social services that promote inclusion.
Together with embarking on coherent and holistic policies, Pavanelli shared to the UN Committee key priority actions that the trade union movement are committed to carry out, in cooperation with civil society partners. These actions include: