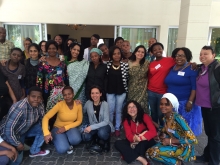 Following a research carried out by ActionAid in 2015 on young urban women in Ghana, India and South Africa a workshop was held on 16-18 November in Johannesburg, South Africa.

ActionAid carried out a research during 2015 in order to explore the interlinkages between bodily integrity, economic security and equitable distribution of unpaid care work in young and poor urban women in Ghana, India and South Africa.

A workshop was held in Johannesburg on 16-18 November in order to disseminate the research findings. PSI´s delegation was composed of Naomi Dedei Otoo, Public Utility Workers’ Union of Ghana and WOC´s titular member for English-speaking (East and West) Africa, Mamagadi KGONODi, Democratic Nursing Organisation of South Africa (DENOSA) and Verónica MONTÚFAR, PSI´s Gender Equality Officer. They noted that the countries share a similar pattern of urbanisation; youth bulge and persistent gender inequality, resulting in an unequal burden of unpaid care work, growing gaps in access to economic resources and a lack of access to public services. This last point is the fundamental link between young urban women (YUW) and PSI.

The lack of access to public services was noted as an important barrier to many young urban women to exercising their human rights to reproductive and sexual health, water, electricity, sanitation and education.  In this sense, the research concluded that for these young women, gender responsive public services (GRPS) would have an enormous impact in reducing their burden of care work, supporting their struggles for economic security and building their capacity to ensure their own bodily integrity.

Naomi Dedei Otoo, Public Utility Workers’ Union of Ghana and WOC´s Titular Member for English-speaking Africa stated that “PSI is committed to develop more the GRPS concept and integrating it to its agenda of universal quality public services.”

A new partnership was established to advocate against privatization and gender responsive public services through sisterhood between young urban women and Public Services Women Workers (PSWW).