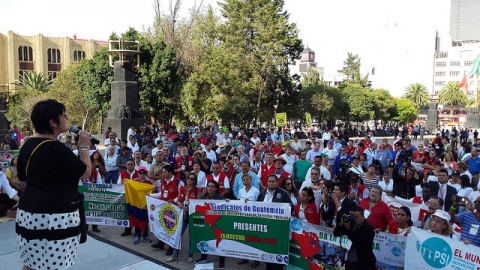 Public services unions across the Americas are determined to oppose the new wave of trade agreements driven by corporate interests and negotiated in secret. On 23 April, in Mexico City, the first regional demonstration to oppose TPP, TTIP, CETA and TISA.

“There is an increasing attempt to negotiate trade deals between the European Union, United States and Latin American countries that will inevitably destroy jobs, increase privatization of public services and undermine the policy space required for genuine economic development,” said Rosa Pavanelli, General Secretary of PSI.

“These agreements will bind sovereign governments and circumvent national and local legal institutions, shifting power to corporations and away from democratic institutions.”

According to Jocelio Drummond, regional secretary of PSI, such agreements seem designed “to undermine workers safety, environmental regulation, the ability to deal with climate change, financial regulation, privacy measures, consumer protection and migrant workers' rights and drive up the costs of medicines.”

In a joint statement, public services unions of the Americas, from Canada to Chile, from United States to Uruguay decided they will intensify actions to mobilise public support with other civil society organisations, and to lobby national political parties and institutions.

“These trade agreements will not help our economy at all, but just benefit some big corporations from richer countries,” comments Adrian Arroyo Falcon, from SUTGDF.

“In Mexico and in the Americas in general, many services are already privatised and this system has proven to be a total failure, since it helped tax elusion, mismanagement, corruption and dismissals, with no real improvement for both citizens and workers,” he added.

“There is still much work to do on our side, as trade unions,” said Alberto Pulido, from STUNAM.

“We need to start a serious discussion about issues like trade agreements and tax justice; this should be a fundamental part of every union's agenda in the American region.”