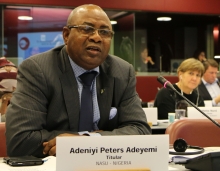 PSI has criticized the entire privatization exercise of federal government, describing it as unfavorable to workers. In a parallel development, the Lagos State Council of Trade Union Congress (TUC) has decried the recent bill passed by the Lagos State House of Assembly, denying Lagosians access to water.

According to Brother Adeyemi, “As a result of privatisation, employment is no longer secured, what you see is abuses against the workers. Virtually every utility in our country is been privatized. Despite the widespread conviction that government has no business in business and everything has to do with the private sector, we are aware that most of our national assets have been sold to individuals. We also know that most of the privatization projects that the government has embarked on have not succeeded. The so-called privatisation has failed, and collapsed".

“We have privatisation of power in Nigeria. Despite the people's opposition, those in government decided to go ahead to privatise but after the privisation we are seeing a complete collapse of the industry. Ironically, even water is no longer free. These matters are giving workers concerns; if we do not stem privatisation this time then we might get to a point where even the air we breathe will need to be paid for," he added.

He urged the government to reverse its policy on workers’ rights and draw up agenda on how to end the mistreatment of workers. The United Labour Congress (ULC), president Joe Ajearo said there was need for government to put a stop to selling company assets as means to end the economic recession.

The trade unions called on Governor Akinwunmi Ambode, to jettison a bill, describing the proposed law as obnoxious and anti-people.

The law, as quoted by TUC stipulated that: “Session 137 (1) (a) No person or group of persons shall sink or cause to be sunk boreholes, hydraulics and other structures connected with the supply of surface ground water or treated water without obtaining the necessary permit from the office of Drainage Services."

Get a global overview of privatisation of public services, subscribe to PSI’s newsletter "Privatization Watch" in English, Français or Español.