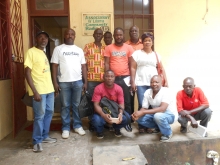 Liberia has three health workers per 10,000 people and was the third and worst hit by the Ebola crisis of the three nations of the Mano River basin with more than 4,800 dead and 10,672 becoming infected. [ [This article is an extract from the 2016 Update "PSI trade union response to the Ebola Virus Disease".]

The ILO estimates that 41 health workers per 10,000 people are necessary for an adequate healthcare system. Liberia has three health workers per 10,000 people and was the third and worst hit by the Ebola crisis of the three nations of the Mano River basin with more than 4,800 dead and 10,672 becoming infected. According to the WHO, at the peak of transmission, during August and September 2014, Liberia was reporting between 300 and 400 new cases every week.

The Liberian health sector had only started to recover from the consequences of years of civil war when the Ebola crisis hit. Poorly funded, and under resourced, with thousands of healthcare workers seriously under paid or kept on for years as volunteers it soon became clear that health workers were hardest hit and paid the price for the bad working conditions, the inadequate system and the lack of protection. Government and other stakeholders ignored the unions’ call for protection, better working conditions and incentives / bonuses to keep health staff at work in such a dangerous environment.

The Liberian Government had no plans to protect healthcare providers, in the last ten years not one public health worker has been vaccinated against any disease condition and no Occupational Health & Safety Division have been installed at the workplaces. Ebola has not changed that lack of intention.

Confronted by the lack of action of governments in all three countries to protect health workers, the unions took action themselves. In Sierra Leone for example, unions called upon the health workers not to treat patients if no protection was available, in an attempt to slow down the death rate amongst health workers.

In Liberia, protests were organised by the two health workers’ unions, the National Health Workers' Association of Liberia (NAHWAL) and the National Private Sector Health Workers' Union of Liberia (NPSHWUL). NAHWAL, representing health workers in the public sector, is not officially recognised as a union, as the Liberian government despite ratifying the ILO convention on the right to organise, still does not allow public servants to join a union.

Although the union has followed all the required procedures, including paying Business Registry tax as a trade union for two years in a row, NAHWAL has been denied a union certificate. The Ministry of Labour has never officially replied to written requests for clarification. This denial has important consequences for the union, starting with the denial of the right to social bargaining and the right to collect member fees.

In February 2014, after the government failed to live up to the agreements from prior negotiations, health workers went on a nationwide strike. The government responded by recruiting students without licences, who were promised three times the normal salaries. Many were not even paid.

Twenty-two union leaders across the country were fired without any hearing by the Health Minister of Liberia. Following an intervention by nearly all stakeholders, twenty were reinstated, although Joseph S. Tamba and George Poe Williams, respectively President and General Secretary of NAHWAL, have still not been reinstated. Their accounts were put on hold as of May 2015.

Chapter Head of Bong County, Martha C. Morris, a prominent leader of NAHWAL, was one of the twenty-two dismissed NAHWAL leaders. She eventually got recalled but her name was removed from the payroll for eight months. Martha, a dental nurse and department supervisor, advocated for and succeeded in the construction of an Ebola Treatment Unit (ETU) in Bong County. Under her coordination and strong advocacy, the NAHWAL division in the Bong district grew to be the union’s strong hold. But after openly questioning the working condition and wages of the staff of the ETU, Martha was never paid the eight months’ salary owed to her.

NAHWAL's River Cess County representative, Borris Grupee, was transferred from Cesto City to an isolated village in order to make it impossible for him to oversee the affairs of NAHWAL in that county. Several other union leaders and active members have been threatened in a similar way across the country.

Other unions were also targeted:  the President and General Secretary of the Roberts International Airport Workers Union (RIAWU) were dismissed and the collective bargaining agreement (CBA) signed between RIA management and the workers was suspended.

In October 2014, when health workers went on strike calling for hazard pay and protective equipment, the government brought in unemployed people, some of whom were not even health professionals. It also threatened to dismiss those who did not report to work.

Fortunately for all three Ebola countries, the international community stepped in with money, logistics and human resources. Now, at the end of the emergency period, infection prevention and control (IPC) materials are available. This current level of availability must be maintained at all times in order to avoid a future recurrence of massive death toll amongst health workers and population. Health workers still need training and constant refreshers on Ebola control by the WHO and other partners in order to keep them prepared at all times.

Union repression continues as health workers’ unions are not included in any consultation with the government, which continues to threaten trade union leaders with dismissal and is intimidating workers who have no job security and therefore prefer to keep their under-paid jobs in a country where unemployment is widespread. Many union members have become afraid of being identified with trade unions and will not participate in meetings, let alone support actions. This severely weakens the trade union movement and calls for capacity-building and empowerment, as well as an elaborate campaign to bring the current leadership in Liberia to terms with the ILO conventions on the right to organize and trade union rights.