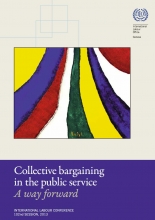 The main focus of the ILO General Survey is on collective bargaining rights in the public administration. It also covers a number of other subjects, including consultation, the civil and political rights of public sector employees, the facilities to be granted to trade union representatives, protection against acts of discrimination and interference, and dispute settlement mechanisms. However, Convention No. 154 applies not only to the public administration, but also to the whole of the public and private sectors. This explains that while the Survey focuses on the public administration for the subjects mentioned, it also refers more generally, and in less detail, to the situation in respect of law and practice in the private sector.

This General Survey report is the first to be conducted on the:

The report reflects the current situation well. Trade unions have raised the issue that substantial categories of public sector workers are denied the rights and advantages laid down in these conventions, or are subject to restrictions of varying degrees of severity. Unions claim an absence of formal mechanisms for collective bargaining in the public service, the use of sub-contracts to deny collective bargaining rights, and slow or ineffective dispute mechanisms. The report draws attention to the increasingly precarious situation of public sector workers.

The three main concerns relating to Conventions 151 and 154 are: (1) the slowness of administrative and judicial procedures in cases of anti-union discrimination or interference in trade union matters and the lack of sufficiently dissuasive sanctions; in some cases, protection against acts of anti-union discrimination or interference only partially covers such acts; (2) certain problems that can give rise to a denial of the right to collective bargaining to all public servants and, in particular, the requirement for trade unions to represent an excessively high proportion of workers in order to be recognized or to engage in collective bargaining; (3) some countries exclude certain subjects from collective bargaining, restrict the right of the parties to determine the level of bargaining or prohibit collective bargaining for specific categories of workers or by federations and confederations.

The report will be presented at the CAS and trade unions will be able to make comments on the General Survey report. This discussion will serve as the basis for a Global Dialogue Forum on the impact of the financial crisis on collective bargaining in the public sector that will take place in 2014.

The report clearly indicates the interest of a number of countries in the ratification of these conventions that we should act upon. Together with you, PSI will continue to campaign for the full implementation of Convention 151 and fight against existing restrictions. In terms of future cooperation with the ILO, it is important that PSI affiliates push for the inclusion of public sector social dialogue in Decent Work Country Programmes.