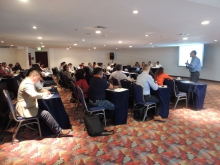 Discussions covered free trade treaties and the Trade in Services Agreement (TISA); the ILO and freedom of association; tax justice and the fight against corruption; and the work of municipal employees.

Juan Diego Gómez, PSI’s Andean Regional Secretary, outlined the development of free trade treaties and the emergence of TISA, which is a threat to public service users, because the countries committed to this agreement are seeking to liberalise trade in these services, benefit rich countries and multinational companies, promote the privatisation of basic public services and restrict the capacity of governments to take decisions about public services.

Darío Restrepo, Karla Oliveira, Paula Leite, Juan B. Estrada, Rubén García, Mirtha Arias, Domingo Pérez, Ana María Ríos, Percy Oyola and others explained their points of view, discussed the issue in detail and put forward proposals formulated by the Confederation of Municipal Workers (CONTRAM), but in line with PSI policies, about how to confront this challenge.

Óscar Valverde, an expert working at the International Organisation of Labour (ILO) made a presentation about the freedom of association, with reference to the ILO conventions on this issue. He also answered questions from delegates. Enrique Espinola, Edgar Merchán, Lairet Figueroa, Moisés Narváez and others made contributions that enriched the discussion, raising questions, making comments and formulating proposals.

On this issue, Juan Diego Gómez mentioned the importance of submitting complaints to the ILO’s Freedom of Association Committee about the violation of ILO conventions. He described how workers can submit comments on government reports to the Commission of Experts on the Application of Conventions and Recommendations. He also emphasised the complementarity nature of the various ways of defending workers.

The third topic was tax justice and the fight against corruption. Luis Martínez, who chaired this part of the conference, started the discussion by referring to corruption, tax avoidance and tax evasion. He said that a tax justice network will soon be launched in Lima, Peru and will fight against this scourge. Luis Enrique Valderrama said that governments are helping transnational companies by reducing the taxes levied on them. He also mentioned the extent of political corruption and the design of government administration models and said that tax authorities have a big responsibility in this field.

Among the proposals put forward to combat corruption and promote tax justice were to institutionalise collective bargaining, with the aim of democratising labour relations; set up citizen monitoring bodies in the trade unions, which should also work on this issue among members; and denounce issues directly to the authorities. Delegates said it was important to make complaints directly and fully to the authorities, including making contact with the Latin American Federation of Cities and Municipalities (FLACMA).

Ana María Ríos spoke about the positive experience of visiting Honduras as a representative of CONTRAM to seek dialogue with local and national government. She emphasised the importance of international solidarity missions and said that negotiating with governments can produce positive results.