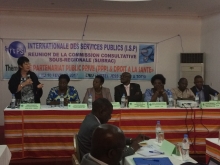 PSI affiliates launched the global Human Right to Health campaign in Lomé, Togo, on 7-8 February and Johannesburg, South Africa, on 3 March. The Francophone Africa launch in Lomé held a seminar on PPPs and the Right to Health, while at the Southern Africa sub-region launch in Johannesburg, leaders of the unions pledged their full support for the initiative, endorsing its framework for advocacy within southern African countries.

The seminar at Lomé brought together over 60 participants. These included: members of PSI affiliates from Togo, Burkina Faso, Mali, Senegal, Benin, Chad, Cameroon, DR Congo, Niger and Guinea Conakry; representatives of all the Togolese trade union centres; representatives of the Togolese ministry of health; academics; leading civic organisations in Togo, and members of the press.

Participants noted that there is an urgent need for African governments to increase health budgetary allocations. It is intolerable that sixteen years after the African Heads of States Abuja Declaration to set aside not less than 15% of annual budgetary provision for health and social services, only two countries (South Africa and Rwanda) have met this target. In French-speaking Africa, budgetary allocation has been barely 5%, annually. The Lomé declaration was adopted, calling for increased funding for public health and a halt to PPPs.

In Johannesburg, PSI General Secretary  Rosa Pavanelli put the campaign in perspective, when she said that, “An important part of the aims of the campaign is to assist affiliates in playing their active role as change agents across the world, mobilising and winning policy influence for the achievement of global health equity, while fulfilling their mandate as health workers in rendering a fundamental human right to citizens.”

Stressing the fact that "Health is a human right," she further informed that the campaign will also engage with big businesses globally, challenging the increasing trend of commodification of health.

DENOSA 1st Deputy President, Modise Letsatsi, presented the objectives of the campaign in the region, saying health workers must be at the forefront of campaigning for good health outcomes and that "spending on health is not an expenditure; it is an investment," as "Universal Health Coverage is impossible without health workers."

He added that health for all cannot be achieved without an accompanying struggle for gender parity. He encouraged affiliates to prioritise health concerns of women in the campaign, as they launch the campaign at the national level “taking into consideration the peculiarities and key challenges faced in realising the right to health in each country.”

As brother Modise, who is a member of the PSI Global Health and Social Care Task Force, said: `We need to infuse our own specific issues in the countries so that the campaign finds resonance among communities in our different nations."

Similarly, common grounds for campaigning such as the Abuja Declaration by African Heads of States to commit at least 15% of their annual budgets to public health will be taken up later in March, during the regional launch of the campaign at the PSI Africa and Arab Countries Regional Executive Committee (AFREC) meeting.