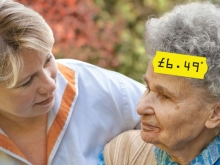 Shouldn't your health come before profits? British UNISON asks in their new campaign to stop privatisation of your public services.

The British government plans to allow more private firms to profit from vital public services, like the NHS, policing and social care.

This could put families at risk. Official figures show that profit-making care homes are less likely to meet minimum standards on care quality. And where hospital cleaning has been outsourced, there have ben jobs cut and a rise in hospital infections. Despite this, more of the services you rely on are under threat.

That's why UNISON's new billboard and newspaper adverts are making the case against privatising more services.

The current outsourced market for public services already has an annual turnover of £82bn, but this is growing all the time. In a widely-quoted report, research analysts Seymour Pierce have estimated that this could rise to £140 billion by 2015.

UNISON believes that putting the profit motive into public services does not help provide quality services - instead the need to drive costs down and still make a profit for shareholders can mean that standards drop. For example:

- the privatisation of school meals provision resulted in kitchens being closed, less use of fresh ingredients and a worsening of nutritional standards.

On 20 October hundreds of thousands of people will gather in London, Glasgow and Belfast to march for a future that works.