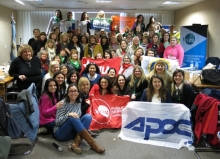 Regional Meeting on Tax Justice and Gender gathered for two days in Buenos Aires almost 60 trade unionists to discuss how the trade union movement must address the inequalities produced by the tax policies in our continent.

"Tax Justice for finance a public service that transforms gender relations." This was the slogan of the end of the Regional Meeting on Tax Justice and Gender that was held on July 25 and 26 at the headquarters of the Association of Fiscal Employees and Public Revenues (AEFIP) in Buenos Aires, Argentina. The event brought together almost 60 trade unionists for two days to discuss how the trade union movement must address the inequalities produced by the tax policies in our continent.

"Tax systems reproduce a predetermined idea of ​​society in which women are not considered as economic agents. It ignores a part of the contribution that women make to the economy, both in the productive sphere and in the reproductive sphere, through the work of caring for and sustaining life", said Verónica Montúfar, Gender Equality Officer of Public Services International (PSI). She added: "This omission does not allow a careful analysis of the different explicit and implicit impacts that tax systems can have on women".

It is precisely this vision that led the PSI to consider the need to hold this meeting - within the framework of the Latin American project on Tax Justice and Free Trade Agreements, with the support of the Fundación Foro Nueva Sociedad (NuSo) and the Friedrich Ebert Foundation (FES) - and address, transversally, the international financial architecture and national tax policies from a gender analysis.

"This exclusion is harmful, as are the absence of progressive taxation systems and the growth of a secret global financial services industry, which perpetuate a structural failure and deny women the realization and progression of their human rights", said the project coordinator Gabriel Casnati, who assumed this initiative in 2018.

Juneia Batista, president of PSI's World Women's Committee (WOC), referred to the importance of "the construction of a new economic order that strengthens the public function through tax justice with a gender perspective". Perspective with which PSI, as part of a global movement, is trying to change the tax architecture.

"We must think that these flows alter the economic order and the distribution of income, expanding social inequality mainly in the case of women, because when the State stops collecting taxes, policies in favor of women are affected", explained the researcher and one of the speakers, Corina Rodríguez, who made some connections between the financial architecture and gender.

The seminar's program included PSI policies on Tax Justice and the struggle of this global organization against tax evasion, tax exemption and tax havens; Tax Justice and Gender Justice, its links with Public Services; a Pilot Study on "Basic public services, evasion and tax evasion 2006-2016: the impact on women and girls in Peru"; A Latin American panorama on national tax systems, with a gender perspective; International Financial and Tax Architecture from a feminist analysis; the new international debates from a gender perspective: technology, electronic commerce and its impact on women; and youth and Tax Justice.

At the end of the event, the main conclusions were announced, as well as some concerted agreements that will be implemented in 2018 and 2019, in order to promote changes based on information, awareness and transformation of the tax narrative in favor of gender justice.