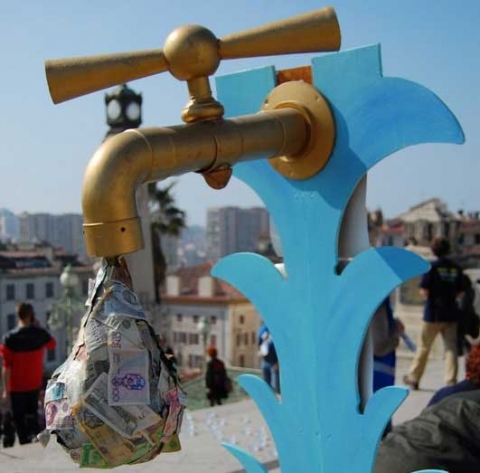 Two international forums on water issues happened in Marseille, France the week of 12 March that – like reflecting pools, mirrored the different values of those attending.

Intimidating guards presided at the iron-gated entrance to the commercialised World Water Forum; delegates who paid up to €700 to attend passed through stringent security screening, while limousines carrying heads of state and corporate VIPs glided through. Inside, a vast trade show marketed the latest in high tech water systems. This event, held every three years, is run by the World Water Council, a corporate think tank whose founders include the World Bank and the private utility giants Suez and Veolia. Water privatisation was promoted in many discussions; high-level policy roundtables were invitation-only.

Across town at the free Alternative World Water Forum (Forum Alternatif Mondial de l’Eau), which was made possible by small grants from regional bodies, young people, indigenous leaders and public service workers shared their views with academics, social justice advocates and retired citizens in a series of open forums housed in a sprawling warehouse complex.  Here the talk focused on really implementing the new United Nations’ Human Right to Water and Sanitation as a common good, not for corporate profit.

Public  Services International trade union members from more than 30 countries joined with civil society allies in calling for the establishment of a legitimate United Nations-led water council and forum where public water policy can be created in an inclusive atmosphere free of corporate influence.

PSI’s European arm, the European Federation of Public Service Unions, announced that its members will use the European Citizens’ Initiative, a new instrument for participatory democracy, to implement the Human Right to Water and Sanitation in the EU. The first aim is to collect one million verifiable signatures from at least 11 member countries in one year.

Such citizen initiatives are increasingly important. In Italy, unions and civil society groups organised a referendum last year in which 96 percent of voters opposed, and thus blocked, water privatisation.  A recent unofficial referendum in Madrid, Spain, showed that 98 percent of residents oppose the sale of their public water utility.  In Thessaloniki, Greece, workers and citizen groups have organised in neighbourhood cooperatives to buy shares in the water utility which the government proposes to sell (for a fraction of its real value) under austerity pressure.

PSI also calls on donor and development agencies to focus their efforts on the poorest countries which really need international solidarity support.  And PSI asks governments to support the public-public partnership concept which allows best-practice exchanges between public utilities.

PSI general secretary Peter Waldorff notes: “There are still more than two billion people who don’t have access to safe water and sanitation in their homes.  PSI is committed to continuing the struggle for water justice until we reach universal access to water and sanitation.  It is not just about life, it is also for dignity and equity.”

PSI decries the choice of South Korea as the host of the 2015 commercialised water forum – this is a country which does not recognise the rights of water workers to organise, which illegally and violently suppresses these workers, does not allow vibrant civil society engagement and which is leading a mercantilist approach to the UN green economy negotiations.