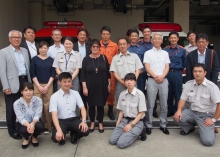 PSI General Secretary, Rosa Pavanelli, arrived in Japan on 22 June for a three-day visit, invited by PSI Japan Council (PSI-JC), the National Coordinating Committee of PSI affiliates in the country. 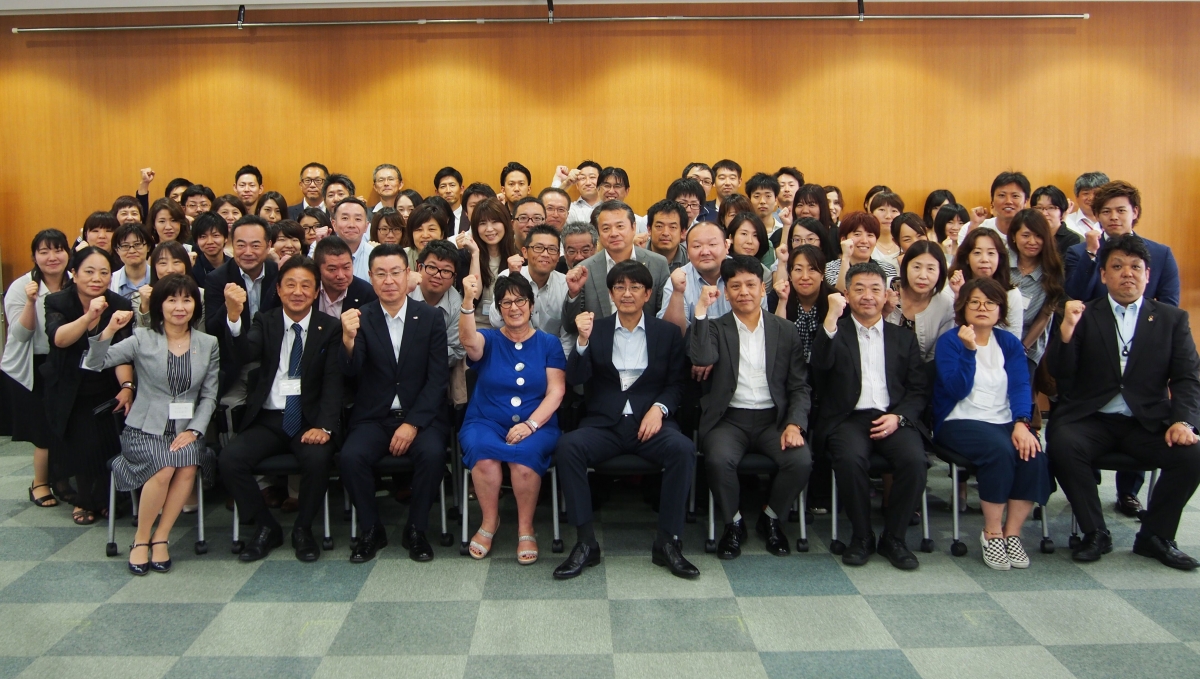 She stressed PSI-JC’s long-lasting contribution to the public-sector trade union movement by improving the working and living conditions of millions of public service workers in Japan and by fighting for trade unions rights for these workers. She gave some recent examples of these contributions:

At the ILO Conference this year, PSI and JICHIRO’s (the All Japan Prefectural and Municipal Workers Union) President Kawamoto worked together to reclaim trade union rights for public-sector workers, including firefighters and prison personnel, whose right to organize has been denied by the government. 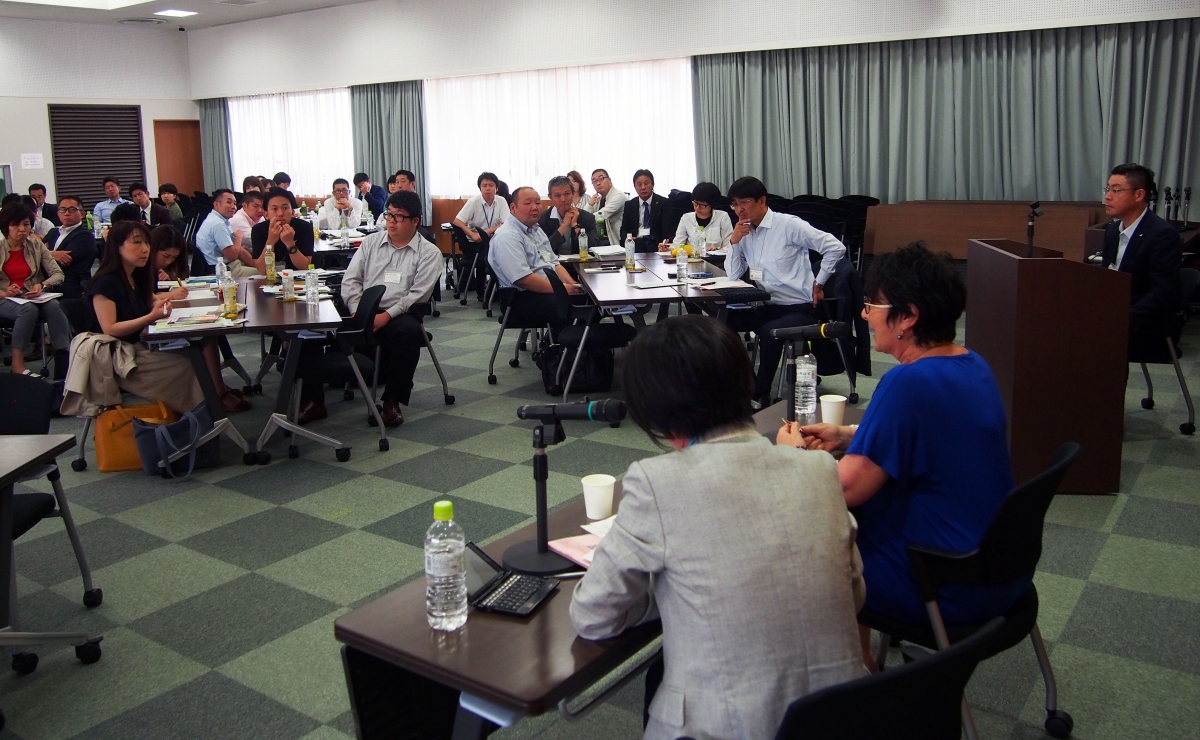 Brother Takeuchi, Executive Director of ZENSHOKYO (National Council of Japanese Firefighters and Ambulance Workers) played a fundamental role in the ILO’s Meeting of Experts to adopt Guidelines on decent work in public emergency services (PES), as well as at the inaugural meeting of PSI global emergency service workers (ESW) network, both held in Geneva.

On the question “Where is the world heading?”, Rosa said:

“All the engineering of global economy is currently built to favour the big corporates’ interest […] The plurilateral system is in crisis and the proliferation of bilateral and multilateral trade agreements is spreading a model that aims to favour MNCs. We extensively discussed how trade agreements such as TPP, TISA and more recently RCEP, will affect workers’ rights and the universal access to public services.”

She then added, “Everybody recognises that in recent years there has been a concentration of wealth never seen before. The ten richest people of the world are concentrating more money than most of the poorest countries all together.

Tax avoidance, often allowed to companies by many governments, together with the persisting practice of tax evasion is eroding the resources available in many countries to ensure decent wages and access to quality public services.”

Rosa Pavanelli also explained that in Japan, the Act to amend the PFI Law was recently passed at the Diet. PFIs originated in the UK during Margaret Thatcher’s government and we have plenty of evidence of the damages that they produced on people and on the public finance.

Japan has been able to resist to massive privatization so far. However, now the Japanese Government is also trying to amend the Law on Water Works. This signals that PSI affiliates in Japan together with the civil society need to counter any acceleration in privatization of public services to protect common goods.

In response to the question “Is there anything we can do to change the tide?”, she said:

“If the power of wealth is concentrated in few hands, if corporates are trying to occupy all space in the global governance, they are underestimating the power of people and the human factor.

Unions have workers with them. We have millions of real people with us. And unions continue to be the most democratic organizations in the world, deeply rooted in the society.

If it is true that the world is at a breaking point, we need to revive workers’ power. We need the courage to say no when things become unacceptable. We need to dare to stop the unhuman exploitation of people and natural resources.

Indeed, the only possibility to change the future of work […] is challenging the corporates power and propose a more democratic agenda, where people, individuals count. This is the aim of PSI Program of Actions (POA), adopted at the Congress.”

Pavanelli added, “Unions have to make all possible efforts to include more women and young workers in their strategies and in their leading positions. There will be no possibility to create a more sustainable and just world […] if they continue to be excluded or exploited.

We need to consolidate unity within the trade union movement […] strengthening our representativeness at national and global levels. In a globalised world there will be no enduring victories if our fights continue to be confined at national level.”

To conclude Rosa stated that our adversaries are united in their objectives and in the way they act globally which means we also need to increase union unity and act in unison globally. PSI-JC’s cohesion in the trade union movement is a good example for all PSI affiliates in the world.

The audience from the Japanese affiliates passionately welcomed Rosa’s speech. 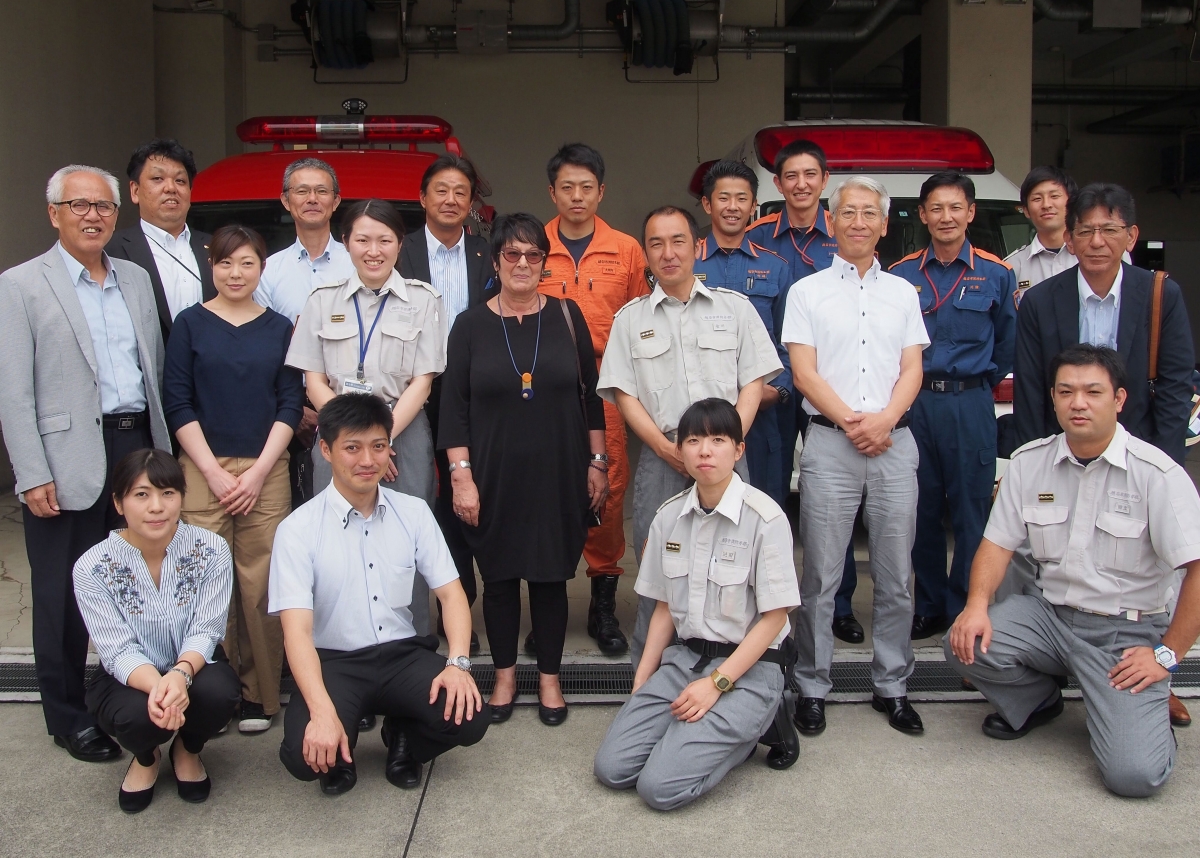 At the fire department, after the briefing on the Koshigaya City Fire Department and the local branch of ZENSHOKYO (National Council of Japanese Firefighters and Ambulance Workers), she visited the commanding post and the waiting room for female firefighters and ambulance workers. Then she experienced the strong earthquake on the earthquake simulation vehicle, which is used for educational purposes, and was also elevated up to 75 meters by a ladder truck of the fire department, which corresponds to approximately the 25th floor of a building. Rosa enjoyed the view, as well as the height. At the end, Rosa and the participants from the ZENSHOKYO local branch exchanged views and opinions, and Rosa answered questions raised by the participants.

At the ZENSUIDO head office, Pavanelli participated in a meeting of the Women and Young Workers’ Committee where she gave a brief of PSI’s history and policies. Following a question raised by a young female union leader, she also explained why she had entered the trade union movement. The women and young leaders were inspired by Rosa’s passionate and personable speech. 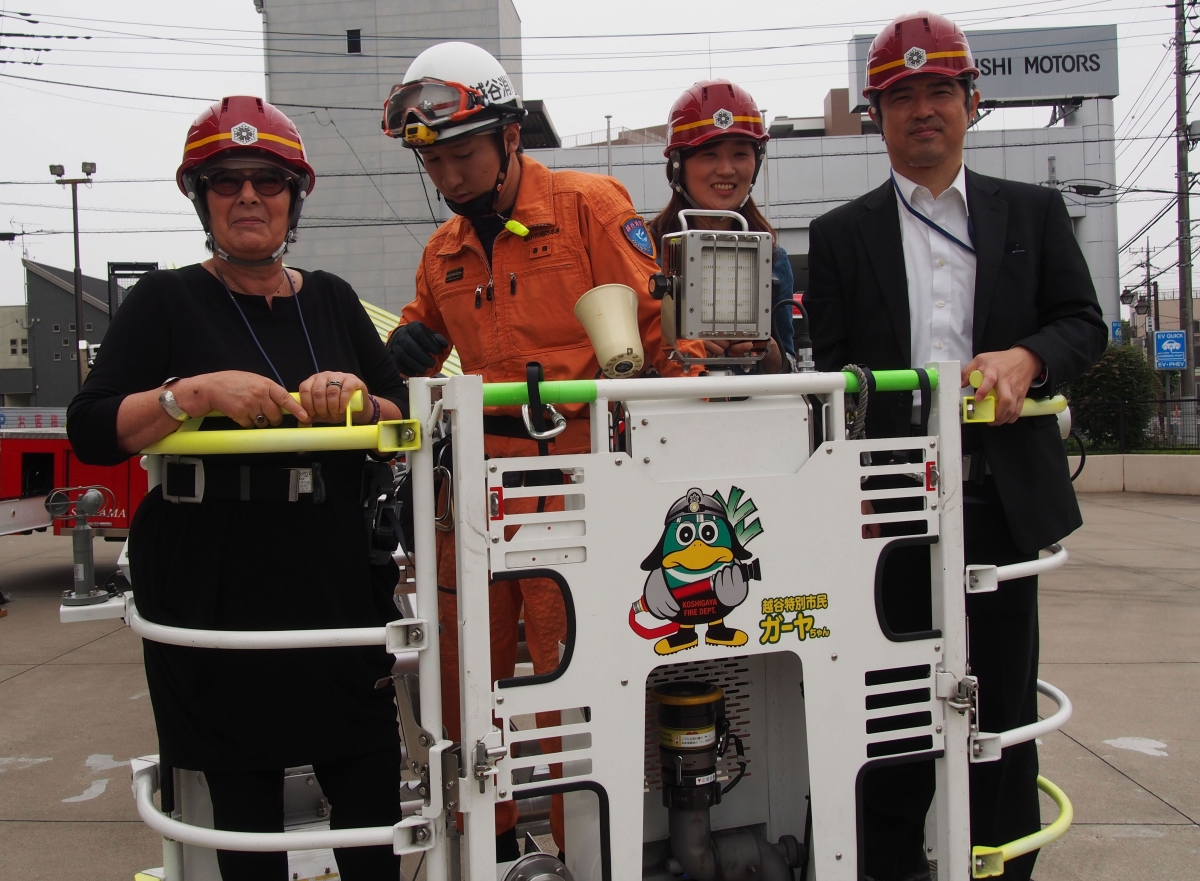 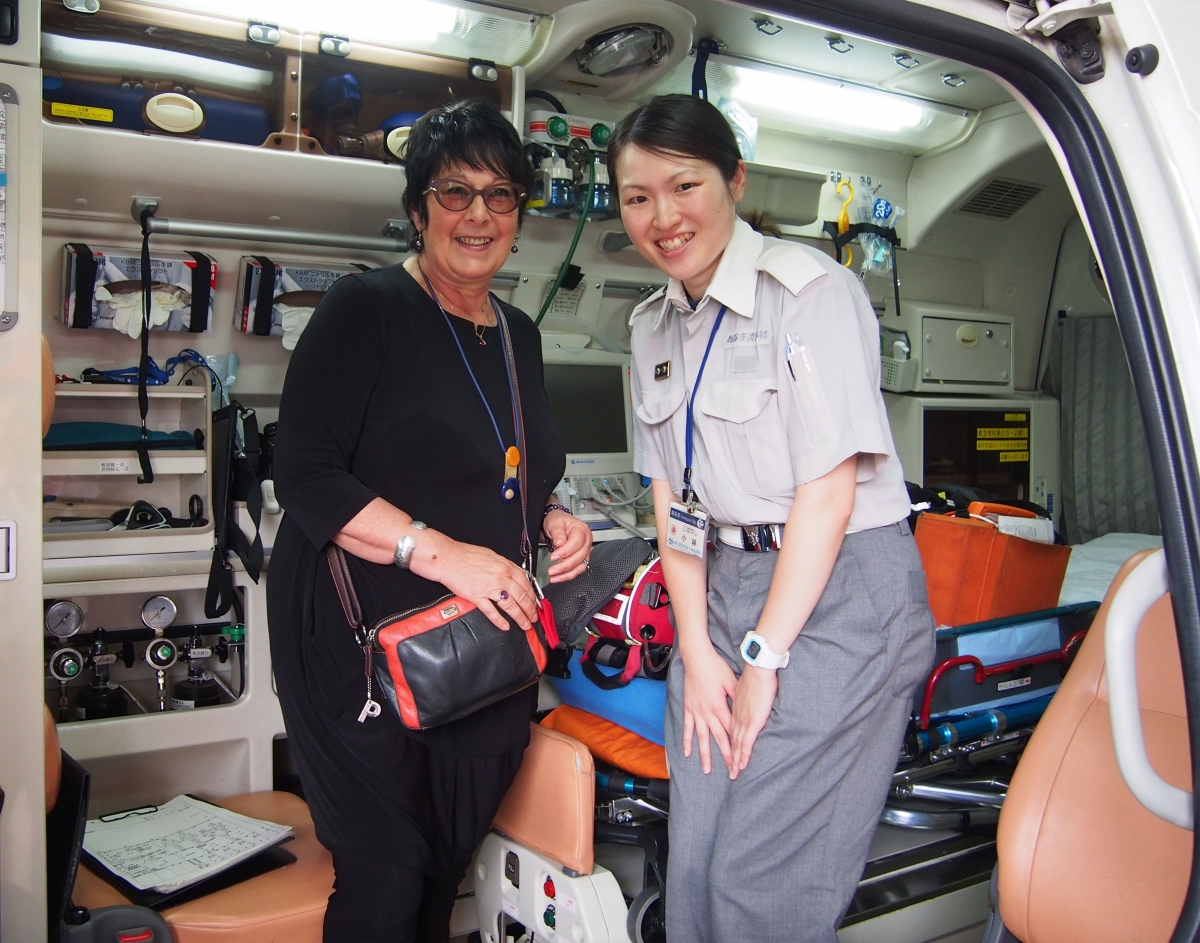