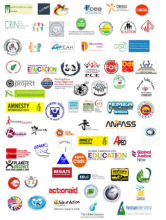 Over 170 unions and civil society organisations from around the world have released a statement calling on investors to cease support for Bridge International Academies, a company running over 500 commercial private schools in the Global South with the support of international donors and investors.

This statement comes two years after a similar one that was addressed to the World Bank. It has been signed by a broad range of organisations from 50 different countries, including human rights, development, community-based, and faith-based organisations, as well as trade unions, demonstrating increasing, broad-based, and large-scale concerns regarding the operations of Bridge Academies.

The statement lists mounting concurring evidence and analysis published in the last two years, including independent journalist inquiries, that raise grave concerns regarding Bridge’s transparency, relationship with governments, labour conditions, and breach of educational standards. It highlights the cases of Uganda and Kenya where Bridge has operated schools illegally and failed until now to adhere to national education standards. In both countries Bridge schools have been ordered to close schools the authorities.

‘The quality of Bridge schools has not been independently assessed. In any case, any claimed gains in learning outcomes could never justify the shocking practices that have been documented in this statement. What can justify for instance the treatment of unlicensed, unregistered teachers being denied a living wage while working over 60 hours work per week?’ reacted Linda Oduor-Noah, from the East African Centre for Human Rights, in Kenya.

The statement outlines how Bridge fails to reach the most disadvantaged it claims to serve due to high costs, as well as negative impacts on families who were accessing the schools. One study found that between 69 and 83 per cent of Bridge parents had difficulty in paying rent, providing food or accessing healthcare due to high school fees.

‘Rather than the 6 USD per month as claimed by the company, the total costs to attend a Bridge school are closer to 20 USD per month. Not only are such costs unreachable by a large part of the population of our countries where Bridge operates, but their announced fee is misleading’, said Salima Namusobya, from the Initiative for Social and Economic Rights, in Uganda.

The document also underscores Bridge’s resistance to public scrutiny and attempts to limit transparency, building on the UK Parliament’s International Development Committee’s recent letter to the Secretary of State, which also raised this issue.

‘We’ve seen how in Liberia, Bridge, which is part of a public-private partnership arrangement with the State, has operated in total secrecy, challenging public procurement rules and undermining independent assessment of its operation by civil society. This confirms the trend in other countries, where Bridge has been involved in the arrest of independent teachers, the silencing of unions, resistance to assessment, and more. This is a global education company shrouded in secrecy and hiding, and this is extremely worrying’, added Anderson Miamen, from the Liberia Coalition for Transparency and Accountability in Education.

The organisations signing the statement are therefore calling on investors and donors to fully discharge due diligence obligations and cease support for Bridge. The organisations cite a number of other recommendations in the statement on compliance with national laws and standards, transparency, accountability, treatment of civil society and redirection of funds to programs that promote equity in education.

‘It is important to recognise that most investors are genuinely seeking to make a difference in the lives of children living in poverty. We share these concerns and recognise the need for major improvements in education. However, there is now significant evidence that investing in Bridge is not an effective way to improve access, equity and quality in education which should be the aim of any education initiative targeting the most disadvantaged. We would welcome an opportunity to explore alternatives with donors and investors, to identify more effective ways to invest sustainably in providing quality education for all children living in poverty;’ concluded Chikezie Anyanwu, from the Global Campaign for Education.

This latest statement follows repeatedly raised concerns about the fast-paced and unregulated growth of certain private education providers, in particular commercial ones, such as Bridge. In May 2015, 116 organisations had published a statement raising concerns about misleading facts regarding the costs and quality of Bridge schools. Since then, evidence from various sources and presented in the statement, including the UN, a UK parliamentary report, independent research reports, and independent media reports, have confirmed those concerns and raised the alarm about the serious gap between the promises of Bridge and the reality of their practice.