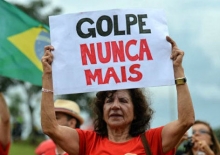 Vice President Michel Temer has already pointed to business sectors that his government's agenda, if he ascends to the presidency, will be markedly neoliberal, with privatization, loss of labor rights and cuts in social programs.

Affiliates of the Public Services International (PSI) in Brazil, while vehemently repudiating the approval, last Sunday (17/4), in the Brazilian Chamber of Deputies, of the continuity of the President Dilma Rousseff's impeachment process, alert to the risks of regress represented by an eventual government of the current vice president, Michel Temer, who would assume the Presidency of the Republic of Brazil after the overthrown of Dilma.

The impeachment process now goes to the Brazilian Senate, which will approve or not the start of investigations. If approved, Dilma will be removed from office and Temer will be taken over until the final judgement in this house. The vice-president have not hidden from anyone that he is one of the main conspirators against the president, and has already signaled to business sectors that his government's agenda, if he ascends to the presidency, will be markedly neoliberal, with privatization, loss of labor rights and cuts in social programs. At the end of March this year, Temer came to praise the privatizations in the 1990s by the government of Fernando Henrique Cardoso, of the PSDB.

Their proposals and intentions are alarming for those who defend quality public services and investment in social policies. In a note published on Saturday (16/4), a day before the vote in the Chamber of Deputies, the "Folha de S.Paulo" newspaper, opposition to the government of PT, revealed that representatives of industry, agribusiness and trade want Temer takes steps which would mean indeed a return to the neoliberal years in Brazil.

A more general measure is the deepening of fiscal adjustment, with the cuts of large volumes of resources for public services, social programs and affirmative action for minorities, severely affecting the poorest people, who depend on these. Members of the business sector ask, and Temer would surely attend them, for the reduction of the number of ministries and expenditures with public employees, and the "rational use of resources in social programs and in measuses to stimulate the economy."
Other proposals are: more flexible labor laws, regulation of outsourcing, in the order it would be allowed in all activities, and labor negotiations made directly between employers and employees. All measures that represent a deep precariousness of labor, whether in the private sector, either in the public sector.
In October 2015, the PMDB, the party of Michael Temer, with his agreement had already launched a proposed agenda "to pull the country out of crisis", at the same time as the impeachment of Dilma Rousseff was again discussed in the Chamber of Deputies.
The document, called the "Proposal Temer", proposes the end of the mandatory participation of Petrobras in the exploitation of mega-oil field called "pre-salt", the permission for collective bargaining prevail on labor standards and "full integration" of Brazil in regional trade agreements, with or without the other Mercosur countries.
For these reasons, Brazilian PSI's affiliates denounce the serious risk of regress in political, economic, labor and social fields if the departure of President Dilma Rousseff's office is confirmed. In addition, the unions protest against the way the impeachment voting process was held in the Chamber of Deputies, when a large number of corrupt deputies, elected with the funding of national and transnational corporations, voted to remove a president on which there is no accusation of illicit enrichment.