Peru: Update on the labour and trade union situation in the public sector 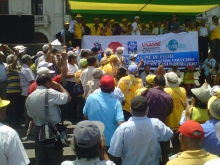 Find here an update on the labour and trade union situation in the public sector in Peru.

Challenges to the constitutionality of the Civil Service Law. The Constitutional Court has responded to one of the seven petitions submitted by a range of institutions and organisations challenging the constitutionality of the law. This particular petition was submitted by members of congress representing the Frente Amplio. The court has not yet considered the petition submitted by the national public sector trade union federations, supported by the CGTP and the PSI. The Constitutional Court has recognised the unconstitutionality of the second paragraph of the fourth transitional provision of the Civil Service Law, which would have removed public administration workers’ right to use the courts to defend their rights. On the issue of collective bargaining, the court has issued two reports that do not constitute a ruling. The majority report recognises the unconstitutionality of restricting collective bargaining solely to working conditions and excluding pay negotiations. The minority report does not agree that this restriction is unconstitutional, but calls on congress to legislate within 90 days to provide a mechanism for negotiating on pay. The court made no mention to the fact that they belong to the previous Civil Service Law (276).

Trade union action and strike. Two national days of action and a national strike were called by the National United Committee for Public Sector Struggle (Comité Nacional Unitario de Lucha Estatal) during March and April, which unites the three public sector trade union federations CITE, CTE, UNASSE, all of which are affiliated to the CGTP and supported by the PSI-Peru. There were also prolonged sector level strikes in the health and judicial sectors after unions were unable to negotiate their demands.

A general meeting of the National Committee (Nacional Estatal) ratified an agreement for a public sector strike, which will begin on 4 June and join existing strikes by health sector workers (doctors and FENUTSA). Municipal workers’ unions will join the strike on 11 June.

The platform of demands call on the government to:

The Road of Shame in Peru. PSI-Peru’s CNC will hold a press conference on 4 June in support of international action and the national strike in Peru. Letters will be delivered to the embassies of the targeted countries.

EN Update on the situation in Peru