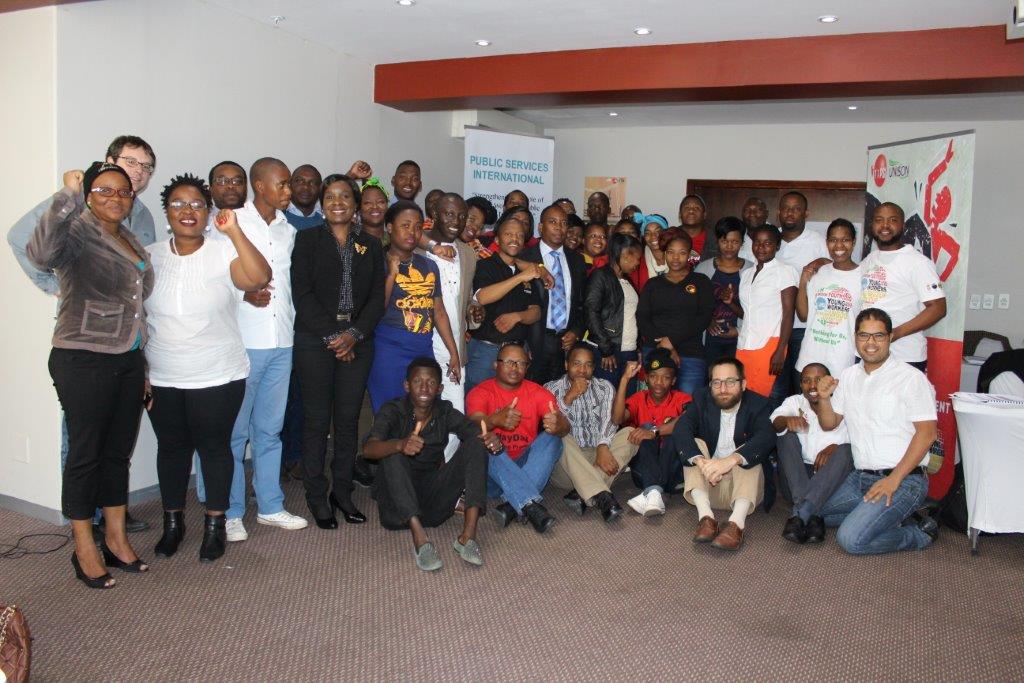 Summit Theme: “The Role of Young Workers in Fighting Precarious Employment and Its Impact in the Public Services”

The Plight of the Youth: ‘It is not easy to be young in today’s labour market’. 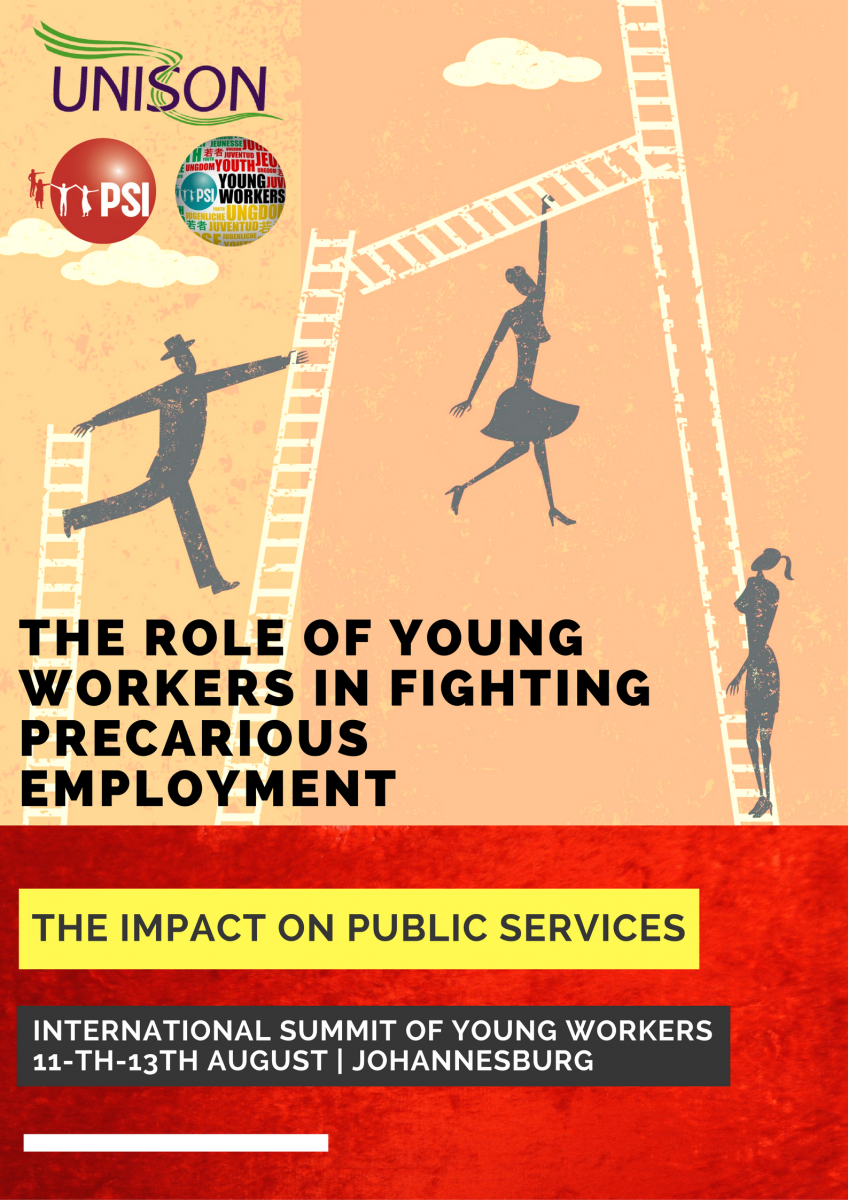 The youth and young workers globally continue to face intractable challenges that exclude them from being active participants and benefiting from the labour market and economy, leaving them in grinding poverty, unemployment and most likely trapped in substance and drug abuse. Due to structural unemployment, young people are not actively involved in the labour market, and in cases where they do, they find themselves being engaged in precarious work, undermining their rights and livelihoods. This is despite the obtaining reality that, in a majority of countries, the youth constitute a greater majority in the population. Needless to say, in this dilemma, then a majority of people are therefore left out of the economic activism in which they should be active participants. It is an undoubted and empirically-tested fact that investment in youth empowerment bears all-round positive spill-over effects on innovation, economic advancement and on the decline of poverty and destitution. In that regard, all 185 member states of the International Labour Organisation (ILO) in the International Labour Conference (ILC) in June 2012 agreed on the need for urgent action on elevating youth development to the top of the national policy agenda, through the infamous “Call to Action”. What continues to lag behind, unfortunately, is the implementation of this call to action, which continues to undermine the noble intentions of the multilateral institution known as ILO.

Despite a steady decline of 3.3 million global youth unemployment in 2012 to 2014, the situation of global youth unemployment still presents a gloomy picture of youth overrepresentation in the global total unemployment rate. According to the ILO Publication, ‘Global Employment Trends for Youth 2015: Scaling up investments in decent jobs for youth’, “Overall, two in five (about 42.6 percent) economically active youth are still either unemployed or working yet living in [chronic] poverty. In the face of such statistics, it is safe to report it is still not easy to be young in today’s labour market” (2015). The same report goes on to mention, however, that there are mixed trends, some indicating positive developments of decline in overall youth unemployment in some regions of the world, while in others there is a continued trend of downward spiral.

Sub-Saharan Africa, where the Southern African sub-region is located, continues to witness a decline in the youth unemployment rate – from 12.1 to 11.6% from 2012 to 2014 - , however, this seemingly positive development is stained by the fact that as more and more young people get absorbed into the labour market, they increasingly become engaged on unsafe, unhealthy and underpaying conditions of work. This increase in precarious employment talks to the theme of this summit. Notwithstanding this precarious state of employment, we continue to witness more and more youth sliding into poverty, thereby being susceptible to being attracted to criminal and other socially unacceptable activities as they strive to earn some form of living or the other. Further compounding the problem, is the fact that in most Sub-Saharan countries the more young people get education through to tertiary, they run a huge risk if securing employment, which presents them the challenge of yet another risk of precarious employment. The incidence of long term unemployment in Sub-Saharan Africa is relatively high, at 48.1% compared to the other regions, only second to the Middle East and North Africa, at 60.6%. Yet again, this clearly illustrates the situation of the young person who is left out of the labour market, or if involved in the labour market, they are involved in jobs fueling poverty.

‘The Youth Unemployed or Living in Poverty, yet Working’: Need for Urgent Action

Most conventional economic and developmental trajectories view young people as a ‘social burden’, but deliberately ignore and dismiss the innovative and inherent dynamism that this segment of society possesses. This particular viewpoint therefore disregards the current situation in which young people find themselves today. At best when employed, young people are subjected to highly precarious conditions of employment. There is an undisputable correlation or causal relationship between precarious work, and the neo-liberal trajectory advocating for privatization, out-sourcing, contractual work, commercialization, corporatism and others (including the highly sponsored public-private partnerships – PPPs). This phenomenon intends to make the private market benefit from state entities that have been established, financed and operationalised through public funds for a long time, through selling them to private hands. Not only does this promote a downgrade of the jobs involved, but it also tends to affect the public goods that these institutions are mandated to deliver to the citizens of the world. PSI is highly involved in these discussions globally, and this summit is part of an effort to bring downwards all the discussions to ensure continued campaign at local and national levels.

Since the primary premise of this summit is precarious employment, it would be of first importance to define it. Precarious employment, therefore, is employment that is of low quality and that encompasses a range of factors that put workers at risk of injury, illness and/or poverty. This includes factors such as low wages, low job security, limited control over workplace conditions, little protection from health and safety risks at the workplace, and less opportunity for training and career progression (Source: Rodgers, Gerry and Rodgers, Janine, 1989). In that regard, there is a link between the nature of jobs in the various public workplaces, the public goods delivered, the livelihoods of the citizenry (including the worker themselves), and the state machinery/capacity to deliver on all these public goods. The last aspect of the public institutions’ capacity to deliver on their mandate then links us further with the issue of public finance and the highly discussed issue of illicit financial flows (IFFs), and tax justice.

The summit is premised on this very fact, that young people and workers are an important part of society, as they represent the future and sustainable progress. All forms of investment to the social, political and economic upliftment of young people are therefore a necessary requirement for societal progress, and not an act of charity. Directly confronting precarious work is the cornerstone of the work of PSI, and that is why there are efforts to ensure that since precarious employment affects largely young workers, this is an area that should be confronted with immediate effect. This summit theme is also informed by the AFREC Young Workers’ Meeting which took place in Nairobi, Kenya in April 2016.

Therefore, the summit aims to achieve the following:

Deliberations during the International Summit:

As indicated above, the Summit will focus on the current situation of the precarious nature of employment that young people face, amongst other reasons, because of the “experience trap”, since they are said to be lacking the required number of years in experience for most job categories. This shall be done by way of dissecting the labour market, and its exclusionary character to the youth, thereby leaving them to the whims of employers, who then decide to engage them in precarious conditions of work. For those who remain unemployed, they still, because of lack of ‘experience’ find themselves stagnating in that situation of lacking the ability to be ‘employable’. As an effort to reverse the adverse effects of precarious employment, and its attendant effects, the “Strengthening the Role of Young Workers in Public Sector Trade Unions Project” is behind the hosting of this international and historic event. The South African PSI Young Workers National Coordinating Committee is hosting the international delegates from various countries under the auspices of this initiative.

In order to effectively confront this reality, young worker structures in the respective countries of Southern Africa should be in existence, functional and dynamic, with all the requisite support from mainstream trade union structures and leadership. The summit will therefore assess progress made in relation to this aspect. Areas of support in the establishment of the young worker structures of PSI shall be identified, and mechanisms of support also agreed upon. The South African experiences in terms of labour law amendments (the Labour Relations Act) shall be used as a reference point, so as to sensitize young workers into using the provisions of the law that seeks to reverse precarious employment for the benefit of workers in the workplace. In addition, the South African Youth Wage Subsidy shall also be a point of discussion, in order to analyze the labour market and how it leaves young workers out. An important link between precarious employment, itself an off-shoot of the neo-liberal trajectory, is the knock-on effect it has on both the lives of workers, the delivery of public goods and the ability of the state to ensure all these happens. Therefore matters of Quality Public Services (QPS), illicit financial flows (IFFs) and tax justice issues, labour market exclusion and the situation of young women workers in the workplaces are all discussions to be deliberated linked to each other.

This summit is an international gathering, with participants from across the whole Africa and Arab region, and from the Asia-Pacific region as well. About eight (8) countries from the Southern African sub-region shall also participate, a majority of whom are to be from the PSI affiliates in South Africa, as the hosting country. Leaders of PSI Affiliates in South Africa are also invited. Speakers shall include panelists of high note, like academics from the Global Labour University (GLU), labour law experts (from the Commission for Conciliation, Mediation and Arbitration – CCMA), the International Labour Organisation (ILO), the Thabo Mbeki Foundation, and others. Indeed, this is going to be a lively discussion on matters pertaining to the theme.