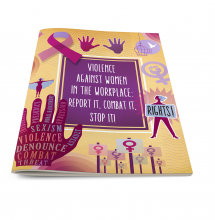 The publication presents the problem and calls unions to combat and prevent violence. It should be used as an information, capacity building, and mobilization tool for women and men in the fight against sexist violence in the workplace.

The guide on violence against women in the workplace, released in Portuguese in late March by PSI Brazil, is available in Spanish and English versions.

“In 2015, PSI Brazil proposed to discuss the violence against women in the workplace with its affiliates. It is a recurring theme of the trade union movement and in 2017 will be discussed at the International Labour Organization (ILO). After some seminars and meetings with women in the Women's Committee of the PSI Brazil, we produced this guide. The text is quite enlightening, it goes from the concepts of gender-based violence to the responsibility of trade unions to fully engage in the topic."

Juneia refers to the proposal to create an international convention against gender violence at work that will be discussed at the International Labour Conference in 2017. In this regard, the newly launched guide brings elements to the debate.

Its content is the result of debates held in 2015 at state-level meetings with the participation of PSI-affiliated organizations in Brazil, under the auspices of project "Strengthening PSI’s Gender Policy with Emphasis on the Struggle against Gender Violence in the Workplace in Brazil and in the Southern Cone", and funded by IMPACT – Ireland’s largest public and services workers’ trade union. This publication was also made possible with the support of AFL-CIO Solidarity Center – an organization headquartered in the United States that promotes worker rights in several countries.

According to the presentation's chapter of the guide, the publication:

“… presents the problem and calls unions to combat and prevent violence. It should be used as an information, capacity building, and mobilization tool for women and men in the fight against sexist violence in the workplace. It is not our goal to exhaust the theme or deepen theoretical discussions on the various aspects to the issue; rather, we seek to provide elements that may enable identifying, reporting, preventing, and resolving cases of sexist violence in the workplace."