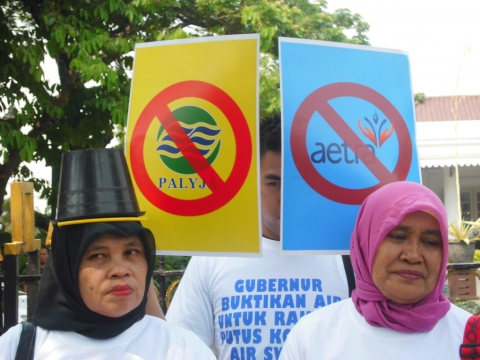 25 March 2015 – The Central Jakarta District Court on 24 March annulled the water privatisation contracts of Suez (PT PAM Lyonnaise Jaya – Palyja) and Aetra, finding that the Public-Private Partnerships (PPP) were negligent in fulfilling the human right to water for Jakarta’s residents.

The court decision is the culmination of many years of resistance by a broad coalition of Jakarta residents, trade unions, and other water justice activists. [1] They were upset not only with the initial, corrupt, behind-the-scenes decision (made under the Suharto regime in 1997) to privatize water supply; they opposed the continuous manipulations of the private operators to increase their profits without improving water services. Water services coverage is lower than promised and water leakage levels are high (44%); water tariffs grew fourfold since privatisation (Rp1.700/m3 to Rp7,020/m3), which is 2.7 times higher than the public operator in Surabaya, Indonesia’s second largest city. [2]

“Yesterday’s decision is a success for the Jakarta citizens and workers, but also for the global water movement. It is further proof of the misguided and myopic World Bank and Asian Development Bank privatization strategies, which are not only unwelcome, but are illegal.  We call on the World Bank and the ADB to immediately cease-and-desist all of their privatization initiatives in the water and sanitation sector, including in Nagpur and Mysore in India, and in Lagos, Nigeria.” [3]

The Central Jakarta District Court decision is coherent with the Indonesian Constitutional Court ruling of 20 February 2015, which annulled Law No. 7/2004 on Water Resources passed by the Indonesian government, again under pressure from the World Bank. The ruling was made on the grounds that water resources have to be controlled and allocated for the public benefit, thus private companies cannot monopolize rights over water sources. [4]

“We applaud these two verdicts. For Jakarta, it is now up to the Governor. Together, we can build a strong public utility for all Jakartans.  We can also get help from strong public utilities, both in Indonesia and from overseas, but without the distortions of profit maximization.”

Jakarta joins major cities in remunicipalising their water services: Paris, Berlin, Budapest, Buenos Aires, Accra, Dar es Salaam, Kuala Lumpur. [5] Most of these remunicipalisations are not ideological, but are because privatisation failed to deliver investment, led to poor services, and unsustainable water rates. Public water services are better able to integrate social and environmental needs that are critical to planning water sustainably in the future.

“The citizen's victory in Jakarta will give an enormous boost to the growing global trend of cities overturning failed privatizations and taking back control of critical water services.  This will empower many more local governments to close the book on privatization, which has proven socially and economically unsustainable across the world.” [6]

These two important court rulings in Indonesia provide momentum for crucial discussions about the right to water and alternatives to water privatisation, only weeks before governments and other water sector decision-makers will gather at the corporate-controlled World Water Forum in South Korea (12-17 April).

[1] KMMSAJ (the People’s Coalition Against Jakarta Water Privatization) filed the Citizen Lawsuit in 2013 accusing the privatisation project of being unlawful under the Indonesian constitution, which defines water as a human right.