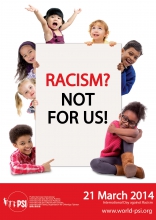 Speak out and take a stand against racism and xenophobia! On the eve of the United Nations International Day for the Elimination of Racial Discrimination, 21 March 2014, Rosa Pavanelli, General Secretary of the global union federation Public Services International affirms that “our commitment to fight racism and all forms of discrimination is guided by respect for human rights and basic union principles: social justice, equality, collective action and collective responsibility”.

In this age of neo-liberal globalization, environmental crises and mass migrations, xenophobia raises its ugly head.  In addition to the demonization of migrants, entire segments of national populations are de-legitimized and condemned as the “other”. Too many governments tolerate growing xenophobia and racism, which nurtures regressive and conservative policies. Often many issues are being woven into one story boiled down to “us against them”.

Rosa Pavanelli says: “The link between racism, sexism and the exploitation of labour reminds us of who is on our side. We must combat anti-social policies that aim to divide workers to exploit us. While inequality and precarious work is on the rise all over the world and public services are being attacked by austerity and privatization schemes, we need to reach out to all workers and stand united to protect current and future generations. Strong unions and civil society can ensure that governments deal with the real issues”.

Fighting racism means challenging governments and support organizations that are the voice of those who are marginalized. The trade union movement must continue to fight for proactive pay and employment equity legislation, including through collective bargaining, which will eliminate the systemic discrimination in employment faced by indigenous peoples, women, persons with disabilities, LGBT, young and migrant workers.

In our unions fighting racism means adopting an antiracism action plan which includes time lines, resources and the key steps to be taken to make internal leadership structure and staffing more democratic. This includes changes in representation, inclusiveness and integration of issues and ideas. By doing so, public service workers create and contribute to a society that will really eliminate racism.

Speak out and take a stand against racism and xenophobia!

PSI’s recent World Congress set a new programme of action for 2013-2017 that directs that PSI and its affiliates shall continue to defend and promote public services, which are at the core of democratic societies founded on human rights, the rule of law and social solidarity. Public services provide equitable redistribution of wealth; and in their delivery ensure that “people are treated with equal respect, provided equal protection, and live free of discrimination without regard to age, gender, religion, national identity, race or ethnicity, disability and sexual orientation. In 2014, PSI will launch an international campaign against Racism.