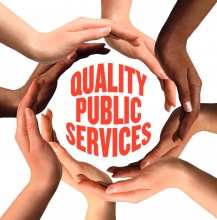 The first of May symbolizes the struggle of the international labour movement. In 2014, International Workers’ Day, May Day, is as relevant as ever. Six years of austerity and neo-liberal policies washing over entire continents have left trade unions struggling for fundamental freedoms and rights at work all over again. Twenty-five years after the break-up of the Soviet Union and the fall of the Iron Curtain, the world is engulfed in another ideological and economic battle. Public service workers from Canada to Paraguay, Algeria to Botswana, South Korea to Thailand and Turkey to Spain, are fighting for their rights and against anti-worker policies, often risking their lives.

Governments are not only challenging social dialogue, but democracy itself by forbidding protest actions and criminalizing social conflicts. A model that incorporates privatisation of public services, clawing back on public spending and reducing the size and role of the state is the package presented as an answer to the current crisis. Jobless economic growth, zero-hour contracts and social dumping create an environment that is conducive to exploitation, leading to an increase in precarious work and generations of working poor. The “trickle-down” economic growth approach to development promoted through globalization has failed to alleviate poverty and instead increased inequalities between and within states as well as between men and women.

PSI General Secretary Rosa Pavanelli says: « We have a responsibility to protect the interests of our members and fight for trade union and workers’ rights. We must join in collective action to ensure that now and in the future quality public services will be available to young and old, generating social justice and equality for all. We confirm and demand the right to strike for all workers in the public and private sector».

Quality public services and social protection floors create the foundation for democracy. It is through the development and enhancement of public services we can overcome the crisis. Indeed, some countries that have come out of the crisis with less inequality are examples of how collective bargaining and income distribution policies lead to economic recovery and social inclusion. Governance, the rule of law and quality public services advance all three pillars of sustainable development. Collective bargaining and dispute settlement mechanisms in the public sector strengthen a culture of peace and negotiation, instead of conflict, impunity and corruption.

PSI campaigns for trade with respect for trade union and workers’ rights and defends earmarked policy spaces for governments and social partners to define and then implement efficient policies for employment and for social transfers – at the same time as excluding public services from trade agreements.

Traditional methods of engaging in global policy setting are failing to produce substantive results for human rights. This is why international solidarity is so important today. Only together we can build a better world. Let us celebrate the trade union movement and our joint struggle for equality, dignity and justice.