Unions and citizens together can reclaim public services and fight RCEP 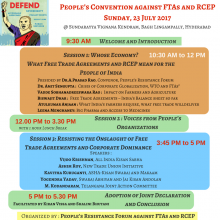 As part of the activities of the Peoples' Summit against Free Trade Agreements (FTAs) and the Regional Comprehensive Economic Partnership (July 22-26), PSI co-organised a one-day workshop on ‘RCEP and the Corporate Attack on Public Services’, held on 25 July, at the Sudarayya Vignana Kendram (SVK) in Hyderabad, the venue of the 19th Round of RCEP trade negotiations. 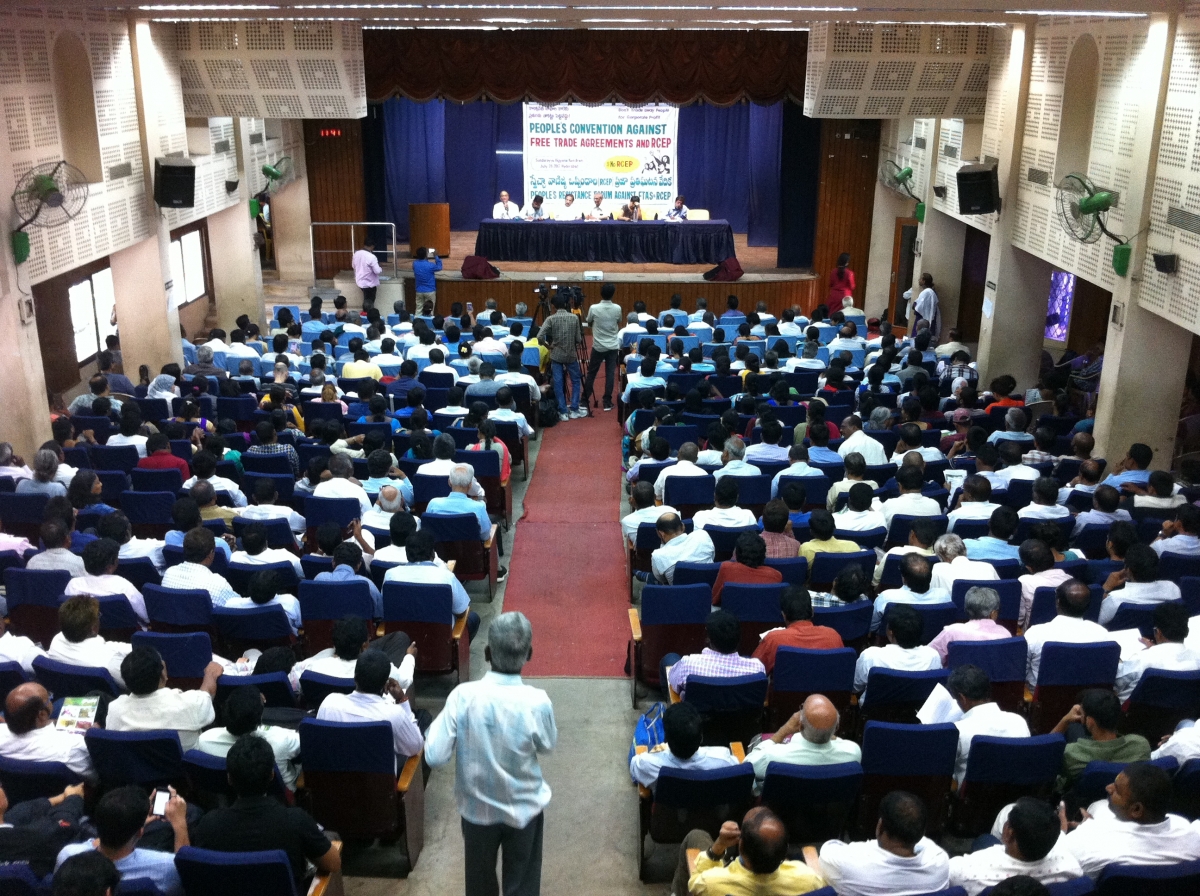 Across the Asia-Pacific region, over the past two and a half decades, the private sector has grown exponentially. This has led to widespread privatisation and a decreased role of the state in the provision of what was hitherto considered essential services – such as healthcare, education, electricity, sanitation and water. In such a context, representatives of public service's trade unions and various social movements held a day long workshop. Issues discussed include the role of trade and investment agreements such as RCEP in furthering coproate control over public services and the responses from people and workers in order to reclaim public services.

Setting the context for the workshop, V Lakshmi, PSI Asia Pacific Secretary said that ‘While Trade Unions and their allies confront various national processes that undermine the provision of quality public services, it is important to understand and influence international processes that will undermine decent work, democratic control and access to quality public services. The latest and biggest FTA challenge confronting workers in the Asia-Pacific region is the 16 nation RCEP, she added.

Dr. Amit Sengupta from the Peoples Health Movement (PHM) a global network of public health activists and practitioners provided an overview of how public services became part of the global trading regime in the 1990s with the establishment of the World Trade Organisation’s (WTO) General Agreement on Trade in Services (GATS). ‘While the GATS negotiations have been stuck, we need to understand that FTAs such as the RCEP are now the new avenue for further de-regulating essential services such as health, he said. ‘But we also need to recognise that international treaties such as the RCEP are only one part of the problem. The bigger challenge is confronting our own neo-liberal governments who have created a compact with large corporations to undermine public services and workers rights’. It is these domestic lobbies for liberalisation that are actively pushing processes such as the RCEP, despite the evidence that institutions such as the WTO and FTAs have completely failed the Indian People’, he concluded. 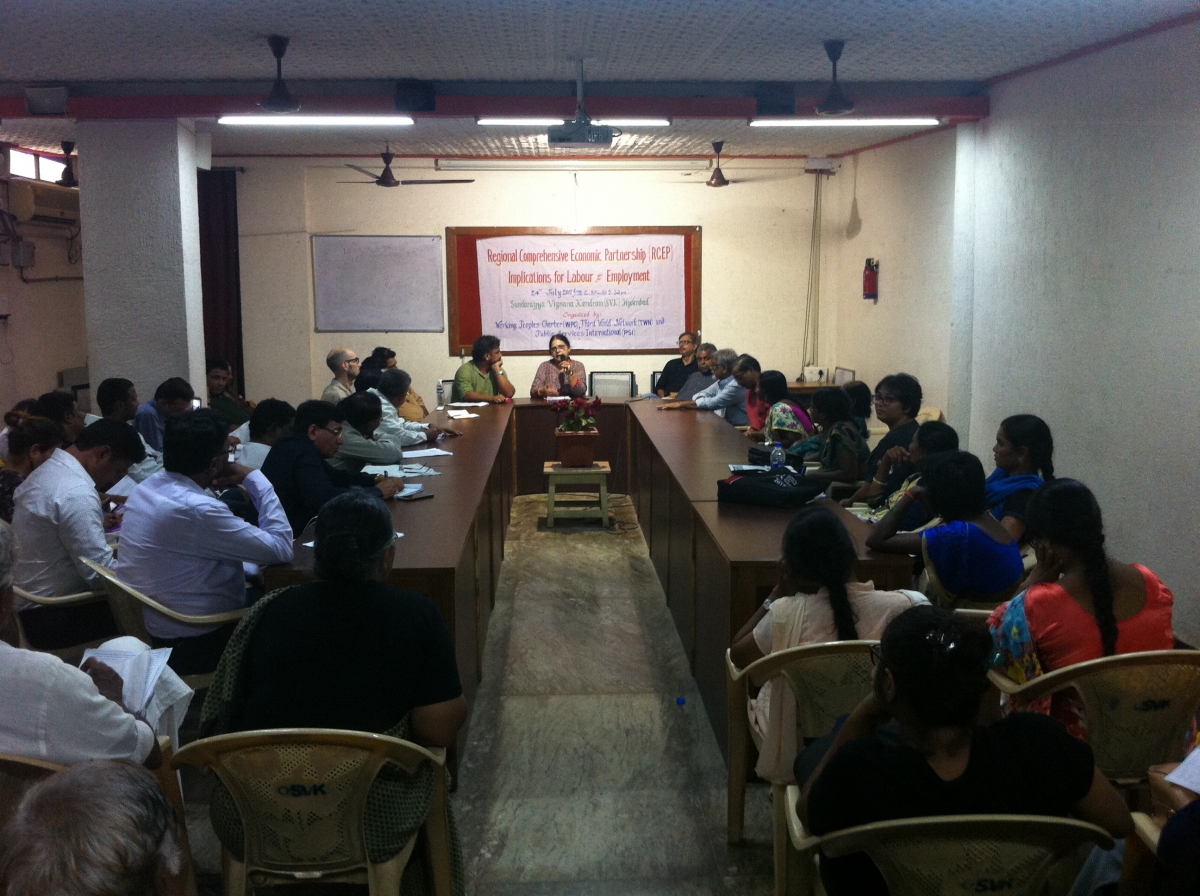 The organisers at the workshop also released a new report titled Reclaiming Public Services – how cities and citizens are turning back privatisation which was co-published by PSI. Despite the challenges of privatisation trade agreements and the entrenchment of neo-liberal governments, the report shows that there is progressive change underway in several parts of the world. Thousands of public officials, workers, unions, and social movements are working to create effective public services that address the basic needs of people and respond to social, environmental and climate challenges. They do this most often at the local level. Other publishers of the report include Transnational Institute, Multinationals Observatory and Municipal Services Project

These successful and inspirational cases also underline the reason as to why we should reject trade agreements such as RCEP and clauses like the Investor State Dispute Settlement (ISDS), said, Benny Kuruvilla senior researcher with the Transnational Institute (TNI). The report found that in 20 cases (10 in water, 3 in energy, 3 in transport and 4 in telecom) when a decision was taken to de-privatise, international arbitration cases were triggered. India alone has already been the target of 20 arbitration cases with over 12 billion dollars in claims. Given that this implies the diversion of public money that could otherwise be used for scaling up public services, there is a growing awareness among trade unions and municipal councillors. RCEP and other trade and investment agreements will severely limit the state’s ability to regain public and democratic control over public services.