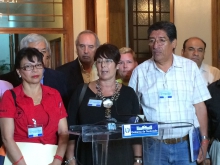 Guatemala continues to hold the shameful position of the most dangerous country in the world for trade unionists. For our global trade union federation, Public Services International, defending the rights of our affiliates in Guatemala is one of our priorities and it will remain so until the situation for trade unionists and workers in this country improves.

Crimes against trade union leaders remain unpunished. The killings of Ovidio Ortiz and Carlos Hernández and 55 other trade unionists remain unresolved. The lack of security also has a severe impact on the administration of justice, without which impunity will persist.

Labour and trade union rights violations continue to be the rule, not the exception. A wide range of punitive measures are used against trade union members, from threats, relocation, redeployment and dismissal to administrative sanctions and criminal convictions, physical attacks and murder.

Women and young workers are particularly pressured not to join trade unions. Short term employment contracts, without any social security provision, make the situation of these workers, especially women, even more precarious.

All Guatemalans have the right to basic social protection and freedom of association!

Femicide continues to be endemic in Guatemala and legislation adopted to address femicide is infamously used against workers. In many cases, legal process is not followed and leaders are imprisoned without any substantive proof of guilt.

Although Guatemala is one of the most unequal countries in the world, privatisation of public services continues. The PSI advocates public-public partnerships and twinning between public services to build capacity and quality public service delivery.

We demand recognition of the human right of access to water and an end to privatisation of water resources!

We are also concerned that the National Civil Service Bureau is planning to introduce civil service regulations that aim to limit the right to collective bargaining and freedom of association in the public administration.

We call on the government to issue a circular calling for respect for collective agreements, the freedom of association, the negotiation of collective pacts and the creation of joint commissions.

We request implementation of the International Labour Organisation (ILO) Road Map and the participation of public service trade unions in the negotiating forums convened by the Ministry of Labour.

The PSI will therefore support its affiliates in Guatemala.  We are launching a sub-regional project on ratification of ILO Conventions 151 and 154, which will provide a practical way of promoting freedom of association and collective bargaining in the public sector. We will continue to intensify international pressure through the ILO and we would like to make it clear that there will be no trade without respect for trade union rights.

Finally, we ask you to recognise the profound causes of the great inequality and poverty in your country. Private interests are still too often given priority. The prevention of violence, a culture of peace and dialogue, democracy and quality public services are key elements that are needed to give this country the future it deserves.