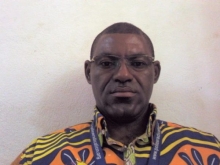 Dr Kiboung was a tireless medical doctor. Like many health workers in the eye of the Ebola storm at North Kivu, he put in almost super-human efforts to curtail the spread of the current Ebola outbreak which has claimed at least 833 lives, with 1,224 reported cases.

Public Services International is saddened by this tragic event. In a condolence letter to Dr Tedros Adhanom Ghebreyesus, Director General of the WHO, Rosa Pavanelli the PSI General Secretary noted that the “work being done by WHO staff and other health workers to stem the spread of the Ebola outbreak in Congo is quite immense” without the added traumatic complication of their being targeted and attacked.

She further added that

"Public Services International has repeatedly stood against the targeting of health workers in conflict zones. We will continue to lend our voice to the #NotATarget campaign and support WHO in advocacy aimed at ensuring the safety and security of health workers in emergency situations."

The safety and security of health workers must be a matter of top priority for governments. And it must also be made clear to armed non-state parties that health workers are #NotATarget. There must be consequences when they fail to respect this, to clearly drive home the point.

The situation in DRC since it declared the current outbreak in its northeast region on 1 August 2018, is particularly worrisome. Even though this is the second worst Ebola outbreak in history, never has armed conflict hampered response like this before. The targeting of health workers as well as civilians in Ebola treatment centres by armed militias is simply horrendous.

Just hours after Dr Kiboung was killed, there was another attack on an Ebola treatment centre in the Katwa region by machetes-wielding militiamen. Butembo and Katwa in the North Kivu province constitute the epicentre of the outbreak.

Medicin Sans Frontiers (MSF) established two Ebola treatment centres in the. But it suspended the delivery of medical services as part of the response, on 27 February due to concerns for the safety of its staff as a result of the troubling spate of attacks, including on one of its centres. Another treatment centre in Butemo was attacked just hours before Dr Ghebreyesus, DG WHO visited it on 9 March. Several health workers were injured and a police man was killed.

Enough is enough! PSI enjoins all social forces, including leaders across Africa, that can in anyway wield the power of suasion on the armed parties, to prevail on them to put an end to the targeting of health workers and civilians. And this they must do urgently.

Our heart goes out to the wife and four children of Dr Richard Valery Mouzoko Kiboung. More family members of health workers must not be made to go through the kind of heart-breaking they are going through now. Health workers have families. Health workers are #NotATarget