Mistreated: The tax treaties that are depriving the world’s poorest countries of vital revenue 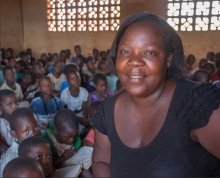 ActionAid has released a new report that reveals how tax treaties are reducing the tax that some of the world’s poorest countries can collect from multinational companies.

Women and girls in the world’s poorest countries need good schools and hospitals. To pay for this, these countries urgently need more tax revenue. A little-known mechanism by which countries lose corporate tax revenue is a global network of binding tax treaties between countries. This report marks the release of the ActionAid tax treaties dataset – original research that makes these tax deals made with some of the world’s poorest countries easily comparable and open to public scrutiny.

The Mistreated report is based on research that has for the first time examined more than 500 international tax treaties that low and lower-middle income countries in Eastern and Southern Asia and Sub-Saharan Africa have signed from 1970 until 2014.

ActionAid commissioned research scoring how much a tax treaty restricts the way that the lower income country can levy profit tax, withholding tax and other taxing rights including capital gains tax.

While all tax treaties restrict the rights of lower income countries to tax foreign companies making money on their soil, ActionAid is particularly concerned about the bottom half – those treaties which are more restrictive than the norm.

The research also shows how tax treaties in practice favour wealthier countries, taking away more taxing rights from poorer countries, and that some treaties result in multinational companies not paying certain types of tax at all in any country, reducing corporation tax collected globally.

Amongst lower income countries, Bangladesh has signed the largest number of very restrictive treaties with wealthier treaty partners followed by Mongolia, Pakistan and then (tied) Zambia and Sri Lanka.

The most aggressive tax treaties ensure that money flows untaxed from poor to rich countries, worsening global inequality. ActionAid would much rather see that this money was spent where it is needed most on healthcare, schools and other essential public services.

Tax treaties have so far received little public scrutiny – but now we hope that everyone will be able to clearly see which modern treaties their country has signed that dramatically limit their ability to tax multinational companies, and compare it to neighbouring countries.

ActionAid is calling on Governments to urgently reconsider very restrictive treaties as a priority, to ensure multinational companies pay their fair share of tax in lower income countries.

PSI calls on affiliates to join ActionAid in calling for better tax treaties.