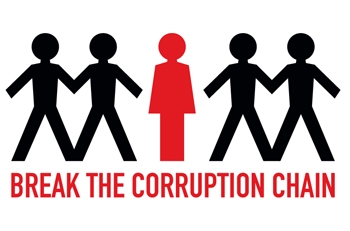 PSI joins the call made by the United Nations to break the corruption chain. Corruption is a complex social, political and economic phenomenon that affects all countries. Corruption undermines democratic institutions, slows economic development and contributes to governmental instability.

The UN campaign #breakthechain highlights that corruption is a cross-cutting crime, impacting many areas. It shows that acting against corruption is imperative to achieving the Sustainable Development Goals which aim to end poverty, protect the planet, and ensure prosperity for all.

“Corruption undermines the public funding of public services, transparency and credibility of government, ultimately undermining democratic institutions. Corruption will never be addressed seriously if we cannot protect those who stand up against exploitation, crime and capture of the state. This is why PSI campaigns for the creation of an international labour standard for the protection of whistleblowers. We need to ensure the labour protection of whistleblowers to safeguard their employment status, as well as their current and future income. The creation and adoption of such a standard by countries will be the real measure of their commitment to fight corruption.”

Combatting corruption has been a priority for PSI since its November 2012 World Congress which built on the work done by PSI affiliates across the globe over the previous decade. PSI’s focus has been on challenging tax havens and secretive deals between governments and multinationals which often provide cover for corrupt practice, leading to billions of dollars in taxes not being paid into state budgets. PSI has argued that a key alternative to crushing austerity and cuts in public spending is through a serious effort to fight corruption.

PSI has aligned its anti-corruption campaign to the fight for global tax justice and the need to protect whistleblowers because it recognises that corruption does not exist in a vacuum. Few can be in any doubt that the global financial crisis of 2008 arose out of weak regulation and malpractices in the financial services sector. People working in financial services may have seen early warning signs which, had policies been in place for these to be dealt with in a stringent and robust way by the companies, could have prevented the economic tsunami that has since been used to justify more extreme austerity policies.

On 31 October 2003, the General Assembly adopted the United Nations Convention against Corruption and requested that the Secretary-General designate the United Nations Office on Drugs and Crime (UNODC) as secretariat for the Convention’s Conference of States Parties (resolution 58/4).  The Assembly also designated 9 December as International Anti-Corruption Day, to raise awareness of corruption and of the role of the Convention in combating and preventing it.  The Convention entered into force in December 2005.

Governments, trade unions, the private sector, non-governmental organisations, the media and citizens around the world are joining forces to fight this crime. The 2015 UN campaign focuses on how corruption undermines democracy and the rule of law, leads to human rights violations, distorts markets, erodes quality of life and allows organised crime, terrorism and other threats to human security to flourish.

Please inform PSI of the action your union is taking by contacting:
sandra.vermuyten@world-psi.org