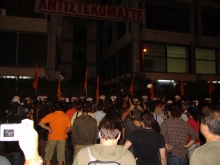 On Angela Merkel’s visit to Greece, the unions tried to organise mass protests and a 3 hour work stoppage. Greek authorities banned the right to peaceful demonstrations against the austerity measures, and mobilised 7000 riot police.

Recently the workers again occupied the building and 18 were arrested, but later released.

According to EPSU, the European federation of public Service unions, the recent arrests is yet another sign of how the tensions in Greece rise.

On September 26 there was a general strike and large demonstrations, and on October 9, on the occasion of Angela Merkel’s visit to Greece, the unions tried to organise mass protests and a 3 hour work stoppage to protest against the neo-liberal policies that are devastating the Greek people.

Angela Merkel is widely associated with pushing these policies through, but the Greek authorities banned the right to peaceful demonstrations in front of the Parliament during Merkel's visit, mobilizing 7000 riot police and criminalizing the protest against austerity.

Germany, and other EU countries have demanded tough conditions on Greece before supporting the country. The conditions that were imposed include reducing the number of public jobs with 150.000, as well as wage freezes, cuts in holiday and other benefits, the lowering of the minimum wage and allowing employers to go below the wages as set in collective agreements. The combined effects of the cuts in public spending and investment have brought the country to its knees with poverty increasing and the economy shrinking for several years now.

“We support the peaceful actions of our Greek colleagues who demand an alternative to the austerity policies that threaten to drown workers, their families and their communities. We denounce the severe curtailing of the right to demonstrate. We expect Mrs. Merkel to join those that argue for new policies that bring Greece and the EU forward, with investment in public services and jobs.”