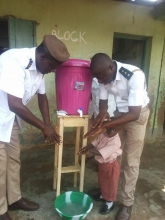 The health situation in Nigeria is similar to that in many other countries, where insufficient funding is allocated to environmental health and universal healthcare and people suffer as a consequence. Femi Abolade, an Environmental Health Officer and a member of the Medical and Health Workers’ Union of Nigeria, denounces the situation not only in his country but across all continents.

"Health, it is said, is wealth. Governments thus have a responsibility for ensuring the soundness of mind and body of the populations they serve, for their countries to be prosperous. Poverty reigns where health outcomes are poor. The spread of emerging infectious diseases, particularly in low- and middle- income countries, points at the need for greater concern of governments to preventative health.

From Africa to Asia and the Americas, there is still so much room for progress to be made to ensure health for all. Disease burdens remain unacceptable. Maternal and child morbidity and mortality are still too high. Poor environmental sanitation and lack of basic hygienic facilities are some of the reasons for this terrible situation.

Air, soil, water, microbes, plants, animals and humans are major components of the environment. Imbalances in the relationship of one of these with the others may have a catastrophic effect on them all. Management of the environment in such a way that there is healthy balance between its different components, contributing to the prevention of outbreaks of disease, is what environmental health stands for.

Making the environment less hazardous for humans is at the heart of sanitation and environmental health. It is an art as well as a science. It deals with the prevention and control of disease factors in the environment, because prevention is cheaper and better than cure.

It is without doubt that environmental health, if properly harnessed, will contribute significantly to achieving universal healthcare.

In Nigeria today, as in many other developing countries, a significant number of homes lack basic hygienic facilities such as toilets and potable water, exposing them to grave health risks and dangers. Solid waste is not properly managed. People (most often young girls and women) travel more than five hundred metres to get water which is often not clean enough to drink.

Young girls face significantly increased risks of sexual harassment, including rape, in homes without toilets, especially when they have to go out to ease themselves at night. Malaria remains the highest killer of children under five in sub Saharan Africa, due to the presence of stagnant water that encourages the breeding of mosquitos. Incidences of diarrhoea, typhoid fever, Lassa fever and Ebola virus diseases are all heightened by neglect in sanitation and hygiene.

Air pollution from industrialised areas is a major cause of climate change. It also poses a serious threat to health and can lead to cancer and other infections, leading to early death. All these show that we have neglected our commitment to environmental health. It is now time to turn the tide.

Universal access to potable water should be a major concern to governments at all levels in Nigeria. Never again should women and children need to travel far in search of safe water.

Open defaecation in and around our communities must be discouraged and stopped to prevent the continued outbreaks of preventable diseases such as cholera and diarrhoea. Governments must help ensure that there are no households where toilet facilities are lacking.

Governments must, as a matter of urgency, improve on the development of critical infrastructure, especially in rural areas. These include good roads and proper drainage to help channel waste water and prevent breeding of malaria-transmitting mosquitoes. This would also help to enable access to an improved waste management system.

In summary, we must understand that the health of one person is by extension, the health of all. The economy of a nation thrives only when its citizens are healthy. Diseases, no matter how insignificant they may seem, affect productivity, social wellbeing and collective prosperity.

We must therefore work together as individuals, groups and governments to expedite actions on promoting environmental health in order to achieve universal health care."