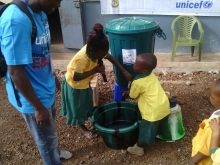 The Medical and Health Workers’ Union of Nigeria (MHWUN), which is the largest health workers’ union in Africa is gravely concerned about the current outbreak of Ebola Virus Disease (EVD) in parts of West Africa generally, and Nigeria in particular. The outbreak which began in Guinea in December 2013 now involves Liberia, Sierra Leone and Nigeria, with about 2127 reported cases and 1145 deaths out of which Nigeria has 12 suspected and confirmed cases with 4 deaths.

Ebola Virus Disease (EVD) is a viral haemorrhagic fever, which is severe, and fatal in humans and some animals.It is highly contagious and is transmitted through direct contact with the blood or secretions of an infected person or exposure to contaminated objects.

The virus targets blood coagulative and defence system and leads to severe immunosuppression. Zaire Ebola Virus is the deadliest of all the Ebola strains and is the species behind the current outbreak in West Africa. Symptoms include severe fever, muscle pain, weakness of the body, vomiting and diarrhoea, and unstoppable bleeding.

Usually the onset of the disease is between 2-21 days, and more often between 4 and 9 days. Easily spread through: kiss, close contact with body, fluid, contaminated objects, etc.

COMBATING THE SPREAD OF THE VIRUS

There are several factors which aid the spread of this virulent infection. These include: high mobility of the local populations; cross-border movement of travellers with infection, and; inexperience in dealing with Ebola.

Health workers in particular are at great risk of infection, and this is of serious concern to the World Health Organisation, which notes the high number of infections among healthcare workers, who are the first line of defence in the affected countries. This highlights the inadequacy of infection control practices in many health facilities, largely attributed to the virulence of the Ebola Virus, which facilitates community and health facility transmission patterns.

The union commends the president of the Federal Republic of Nigeria Dr Goodluck Ebele Jonathan, GCFR and the minister of health Prof. C. Onyebuchi Chukwu for the prompt rapid control strategies put in place and the synergy between all the tiers of the government in response to the emergency. In this light, we also duly commend the governor of Lagos State, Mr. Babatunde Raji Fashola SAN, for the swift actions taken by the state government aimed at curbing the spread of the virus.

The declaration by the WHO and the FGN Ebola outbreak as a Public Health Emergency of International Concern (PHEIC) calls for patriotism, dedication and commitment among health workers in other to arrest the spread and control the disease’s outbreak. Worthy of note and commendation in this light is the prompt implementation by the Nigerian government of all the recommendations and decisions adopted by the World Health Organisation after the meeting of the First International Health Regulations Emergency Committee conveyed under the International Health Regulation (2005) regarding the 2014 Ebola Virus Disease (EVD) outbreak in West Africa.

Medical and health workers are thus advised to observe the following health and safety procedure on coming in contact with suspected cases of Ebola or involved in treatment, nursing care, feeding or bathing of a patient, washing of cloths, bedding or corpse examination of the body or specimen. Where there is the slightest possibility of direct contact with the body fluid, blood or secretions of an infected person, contaminated objects (such as needles) health workers should always put on their personal protective equipment such as wearing of impermeable suits, gloves, face masks, boots etc.

Medical and health workers should be cautious of the increased risk of transmission within health care settings and be on the watch and take all necessary precautions such as barrier nursing, infection control measures –sterilisation and disinfection- and isolation of all the suspected cases of Ebola from contact with unprotected person.

The fact that Ebola Virus can survive in liquid or dried materials for a number of days outside human hosts has made it imperative for effective disinfection in our health facilities. The Ebola virus is susceptible to the following disinfectants: sodium hypochlorite, lipid solvents, phenolic disinfectants, peractic acid, methyl alchohol, ether, sodium deoxycholate, 2% glutaraldehyde, 0.25% Triton x-100, B-propiolactone, 3%-acetic acid (PH 2.5), formaldhehyde and paraformaldheyde.

Ebola virus is moderately thermolabile and can be inactivated by heating for 30-60 minutes at 60 degrees Celsius, boiling at 100 degrees Celsius for 5 minutes, gamma irradiation (1.2 x 106rads to 1.27x106rads) and or UV radiation.

THE HEALTH SECTOR AND SOLIDARITY TO COMBAT EVD

It is a truism that all hands have to be on deck for the health emergency facing us now to be properly addressed. Primary stakeholders are professionals and workers in the health sector.

Medical and Health Workers’ Union of Nigeria is committed to mobilising its membership to actively rise up to the challenge of combating the spread of this dreaded disease. Steps being taken include Training the Trainers workshops and the stepping down of the expanded knowledge base and capacity this would generate to all the states and LGAs in the country, and the development of necessary Information Education and Communication materials for a massive awareness campaign.

MHWUN further notes that the government has been very sincere about resolving the issues that led to the strike by NMA. The Ebola disease outbreak having been declared a public health emergency coupled with the ongoing challenge of terrorist attacks is enough reason for NMA to call off the strike action and join hands with other health professionals to provide the much needed essential service.

In the present circumstance government should not allow the lives of Nigerians to be put in jeopardy. The issues at stake should be subjected to adjudication by the National Industrial Court of Nigeria (NICN) in line with global best practice. The NICN is set up to deal with such situation.

We are in a situation of critical emergency with the spread of the Ebola Virus Disease. Everything possible has to be done to ensure that the spread is curtailed and a halt is brought to the presence of the disease in Nigeria. The proactive steps being taken by the Federal Government and such state governments such as Lagos are very much commendable. The response no doubt requires the qualitative and quantitative deployment of much needed human resources for health. We thus welcome the FGN’s recruitment of hundreds of health workers and professionals to strengthen the port health sub-system of the health sector. MHWUN shall do all in its power to consolidate on the good steps being taken by the FGN and all well spirited Nigerians. We thus as well call on the NMA to urgently call off its illegal strike action and join this national moment of action and solidarity against the EVD.