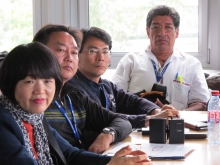 The Committee on the Application of Standards (CAS) is a standing committee of the International Labour Conference (ILC), which meets every year to examine a list of twenty-five countries in terms of their application of core and/or ratified Conventions.

Please see the following links for PSI presentations to the committee on:

At the International Labour Conference in June 2012, the employers’ group blocked the work of the Committee on the Application of Standard, claiming that the experts do not have the authority to interpret conventions and refusing to discuss any cases linked to the right to strike. This strategy challenged the existence of the ILO supervisory system. This year, such a conflict was avoided thanks to careful negotiation between the workers’ and employers’ groups. A discussion on the reform of the CAS is being handled by the Governing Body of the ILO and this is ongoing since last year.

However, employers refuse to recognize that the right to strike emanates from Convention 87 on Freedom of Association and took every opportunity to repeat this point of view in the Committee. The aggressive position by the Employers’ group in relation to collective bargaining in the public sector set the tone for the rest of the debate and individual cases.

An agreement was reached that all 2012 and 2013 ‘double-footnoted’ cases would be discussed, notwithstanding certain developments in a number of cases. It was considered politically important to digest the 2012 crisis. However, it became obvious that this crisis is far from over. We need to fight for the continued existence of ILO supervisory mechanisms. The best way to do that is by using the mechanisms, following up on the agreed conclusions of the cases and getting more involved in reporting on the implementation of conventions.

In the week of 17 June 2013, the report of the CAS will be presented in the plenary of the International Labour Conference. A more detailed report will follow shortly.