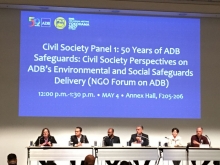 Kawamoto spoke on behalf of trade unions on the following issues: privatisation and Public-Private Partnerships (PPPs), violations of Core Labour Standards and policy direction of the ADB. Geron, joined Kawamoto on emphasizing the negative effects of PPPs.

ADB President, Takehiko Nakao, responding to the issues raised by Kawamoto, said that Core Labour Standards will be included in the final document of the ADB Strategy 2030. He also agreed that PPPs have many negative implications especially for public sector workers.

At the Civil Society Panel “50 Years of ADB Safeguards: Civil Society Perspectives on ADB's Environmental and Social Safeguard Delivery” organised by the NGO Forum on ADB, PSI's panellist Karen Batt from CPSU delivered a powerful speech highlighting the impacts of Public-Private Partnerships (PPPs) on public sector workers, people and communities. She also insisted on the need for strict implementation and monitoring of Core Labour Standards in all ADB projects. 50 years is more than enough!