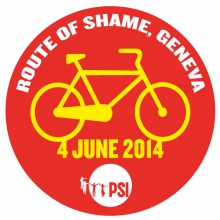 PSI Presentations on the 'Route of Shame', taking place in Geneva on Wednesday 4 June 2014. Presentations can be downloaded in English, French and Spanish.

Led by members of the global union federation PSI, trade union leaders from around the world will join in a ‘Route of Shame’ protest action on Wednesday 4 June and visit missions and embassies in Geneva and other capitals around the globe to demand respect for workers’ and trade union rights.

The ‘Route of Shame’ takes place during the 103rd International Labour Conference (ILC) in Geneva. A major focus of the annual ILC is to
determine whether countries are upholding their obligations to respect the rights of workers and their trade unions under International Labour
Organization conventions.