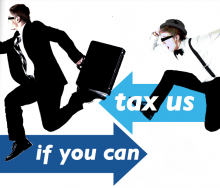 The stealth provision added to the tax bill most especially benefits real-estate investors such as the president, according to Forbes, which estimates that Trump could see tax cut of as much as $11 million for a single year.

A provision snuck into the tax bill at the last minute will provide immense financial rewards to the owners and CEOs of large, private companies such as Koch Industries and to President Donald Trump.

That means the tax bill that Congress approved this week will not only shortchange working families but also enrich the big corporations that make generous campaign donations to politicians who do their bidding.

Perhaps congressional leaders expected the stealth provision for this particular kind of business to go unnoticed. After all, it takes a tax accountant to understand how it works, and unless you own a business that falls into the category of a “pass through,” its benefits won’t apply to you.

But if you do happen make millions – or even billions – as the owner of a pass through, you’ll be able to deduct 20 percent of that income from your federal taxes. And if that business is based on large real-estate investments, like it is for the Trump family, there are even more system-rigging features in the new bill’s pass-through loophole.

The politicians who inserted the pass-through provision into the bill will tell you that many of those who will benefit are small businesses, but that’s not the whole story.

Others are immense companies, such as Cargill and Koch Industries. And still others are hedge funds, most of which employ just a few people but are designed to reap huge yields by making high-risk investments, or by making bets on the behavior of markets or even the weather.

Renaissance Technologies is one of the largest hedge funds. While founder James Simon routinely donates to Democrats, co-CEO Robert Mercer has bankrolled the enterprises of Breitbart News executive Stephen Bannon, whose aim, he says, is the dismantling of government.

The companies owned by Trump are all pass-through entities, held together under the umbrella of The Trump Organization. The stealth provision added to the tax bill most especially benefits real-estate investors such as the president, according to Forbes, which estimates that Trump could see tax cut of as much as $11 million for a single year.

This provision and the tax bill’s overwhelming generosity toward big corporations and the super-rich at the expense of working families is why AFSCME Pres. Lee Saunders blasted right-wing congressional leaders for passing the measure.

In a statement, Saunders said the bill “confirms the absolute worst fears” people have about their leaders in Washington.

“The right wing of this Congress and the president have chosen not just to enrich wealthy and powerful corporations and CEOs, whose army of lobbyists helped to draft this bill in secret,” Saunders said, “but to personally enrich themselves at the expense of our communities.”