Women are most likely to be affected by violence in the workplace, but we are all victims 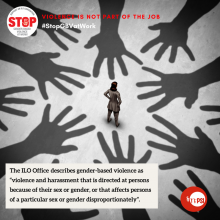 In an op-ed published around the world, PSI Gender Equality Officer, Verónica Montúfar, writes about how sexual harassment and assault are part of most women’s professional lives. Even though men can also suffer violence and harassment in the workplace, stereotyping and inequality in power relationships make women much more vulnerable to it.
Verónica Montúfar*

The worldwide #MeToo movement has revealed that sexual harassment and assault are part of most women’s professional lives. However, this focus that comes from Hollywood should not make us overlook the other forms of violence women suffer in the world of work.

Sexual assault, insults, humiliation, discrimination, and beyond that contradictory orders or isolation are becoming ‘natural’ aspects of work relationships. Even more so when we realize that many women are afraid to report their attackers, because of not knowing who to turn to or out of fear of losing their jobs. Even worse, some women have got used to it, believing that violence is inevitability, that it ‘is part of their jobs.’ In Mexico, for example, 9 out of 10 women who indicated having experienced physical or sexual violence in the work environment never asked for help or filed a complaint or report.

Even though men can also suffer violence and harassment in the workplace, stereotyping and inequality in power relationships make women much more vulnerable to it. Social and gender-based discrimination, which are predominant in society, are reproduced and exacerbated by organizational culture – and tend to drive women or (ethnic, sexual) minorities into subordinate or even violent situations. And many women never manage to find relief at home, given that domestic violence is also part of their lives. A UN Women report highlights how 35 per cent of women all around the world have experienced physical and/or sexual violence at some point in their lives.

This situation can lead to women leaving their jobs or giving up working, which results in interruptions in employment with consequences for current and future income (less right to pensions etc), adding to the already unacceptable gender pay gap of 23% between women and men. Even though workplace violence affects all sectors and all categories of workers, the health sector – where women make up the majority of workers – is the one that best illustrates the seriousness of the situation. The World Health Organization (WHO) calculates that violence in this sector makes up a quarter of all assaults that take place in the workplace. For example, a recent report from the United States discloses that 54 per cent of emergency nurses reported experiencing violence in the workplace within the seven days of their participation in this study alone.

When nurses are asked where this violence comes from, they point to patients and visitors on the one hand, and their colleagues and superiors on the other. In fact, work-related violence, and the steady increase thereof, is also due to external factors. It intensifies in situations of war and economic crisis, but it is also a consequence of privatization and austerity measures, which bring with them more deregulation and increased flexibility that translate into violence towards workers in general. The International Labour Organization (ILO) states that the risk of violence in the workplace is seen to increase due to factors like changes, restructuring of production processes, insufficient staff, excessive workload, non-standard contracts and/or lack of safety.

Similarly, the victims of workplace violence are not only those working in those places. As you can see in hospitals, exhaustion, depression and the absence of sufficient staff ends up affecting the quality of service for patients and their families. In this way, violence in the workplace also adds to higher fear and anxiety levels in society.

For this reason, Public Services International (PSI) has been advocating the inclusion of the concept ‘third parties’ in the characterization of victims and perpetrators of work-related violence, an aspect that we have seen to have a direct impact on the quality of public services. This global union’s approach goes even further, proving that deteriorating work environments, i.e. deregulating and dismantling the public sector to hand it over to private capital, is one of the principal causes of violence in public services – and it is imperative to do battle against these forces!

On this International Day for the Elimination of Violence against Women, we celebrate the inclusion of the concept of ‘third parties’ in the text of the future agreement that will be negotiated conclusively at ILO in 2019. We need to recognize the importance of the social dialogue and the establishment of concrete protection and prevention measures between de actors in the world of work: the employers, the workers and the Governments.

As a society, we are all victims of work-related violence. Getting rid of it is a task for us all.

Read the op-ed in the media: