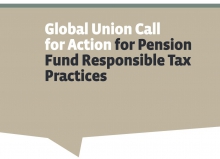 Trade unions have unveiled a new initiative to tackle global tax evasion by integrating tax risks into responsible investment policies in pension funds worth over $20trillion where unions and their trustees are involved in fund governance.

A statement signed by 45 union bodies from 19 countries to launch the initiative also supports rule changes for fair and responsible tax practices as envisioned by the G20 OECD Action Plan on Base Erosion and Profit Shifting (BEPS).

Sharan Burrow, ITUC General Secretary said “Attempts to increase short-term returns through aggressive tax planning undermine the sustainability of our economies. As the stewards of workers’ capital, pension funds should to take reasonable steps to address tax risk in their investment portfolios”.

The initiative sets out trade union expectations on how pension funds should address tax risks, including evaluation processes for existing investments, conducting due diligence for any new investment mandate, encouraging corporate country-by-country tax reporting, and engaging with external fund managers to that end.

The trade union statement also raises concerns about the growing pressures from business groups and large multinational enterprises to push back against the G20-endorsed OECD BEPS Action Plan, a 15-point plan to ensure taxable profits are allocated where actual business activity occurs. “This OECD Action Plan could be improved, but it is heading in the right direction” said John Evans, General Secretary of the Trade Union Advisory Committee to the OECD (TUAC). “Pension funds are long term asset owners, they should raise their voice to support, not weaken this global tax agenda”.

“Some powerful finance and business interests are still trying to undermine international cooperation to put an end to the seemingly endless scandal of dodgy tax dealings, particularly by some notorious multinational companies.  These tax tricks are deeply damaging to governments’ fiscal positions, and also hurt competitor companies which do pay their fair share. Governments need to regulate to ensure that companies can no longer escape tax obligations, and we are now seeing this issue move to centre-stage in pension funds,” said Burrow.