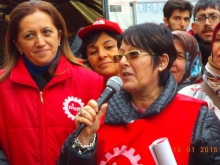 Police brutally attacked a group of dismissed health workers at the Maltepe university hospital in Istanbul, Turkey, on Tuesday 25 February after they tried to enter the hospital's offices.

Latest update 26 February: the arrested workers were released at the end of the day however two workers are suffering from dislocated arms. The remaining workers are back at the picketline tent and continuing the protest.

Protesters set up camp in front of the hospital last December to demand the reinstatement of 98 workers dismissed for demanding higher wages and shorter working hours, and for joining Dev Sağlık-İş - the health union of the progressive labour confederation, DISK.

“We only asked to speak to the rector and some of us waved a banner that read “Let the dismissed workers be reemployed,” say the protesters.

Police intervened repressing any form of action, both outside and inside the hospital building, leaving two injured, according to the unions. They then arrested 34 people, including Arzu Çerkezoğlu, DISK Secretary General.

“They cannot detain a union leader without permission of national authorities,” says Kıvanç Eliaçık, from DISK.

Pavanelli criticised the hospital management's unfair layoffs, asking them to reinstate the dismissed workers immediately and start negotiations with the trade union.

“Things are even worse today. The brutal repression of a legitimate and peaceful protest is an unacceptable violation of labour and human rights,” she commented.

The LabourStart campaign, launched in January by PSI, EPSU and DISK calling for the re-instatement of these workers has already collected more than 10,000 signatures but we need to keep up the pressure.