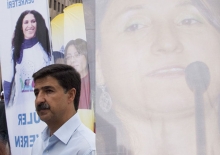 Nine women trade union activists in court in Ankara; three returned to prison, six released pending trial. Özkan Yorgun is protesting outside the courtroom in Ankara where his wife's hearing is taking place.

Standing outside the courtroom in Ankara where his wife’s hearing is taking place on 4 October 2012, Özkan Yorgun explains how their two sons have been deeply affected following the arrests of both parents, who are trade union activists. The Yorguns’ youngest son has been having difficulty concentrating on his school work.

“How would you be if your father and mother are arrested in front of you? You become nervous… First it was their mother and then four months later their father,” says Özkan Yorgun, husband of Bedriye Yorgun, one of 15 women trade unionists who were arrested and imprisoned on 13 February this year. He himself was taken in the second wave of arrests on 25 June when 58 trade union members were served with arrest warrants.

Bedriye Yorgun is a nurse and is the women’s secretary of the trade union for health workers, SES. Before that she had been SES president from 2008 to 2011. SES is part of KESK, the independent trade union confederation in Turkey.

The noise of the 5,000-strong demonstration swirls around in front of the court in Ankara as Özkan Yorgun tells his story.  Loudspeakers blare out: speeches from union officials; Venceremos (We Will Win) the famous song of the Popular Unity movement in Chile before the military coup in 1973; Turkish opposition songs; and Kurdish music – which leads KESK members to dance traditional Kurdish dances in front of the austere Turkish courthouse.

The issue of Kurdish autonomy remains a sensitive issue and affects even this trial – all the 15 women trade unionists that were arrested are Kurdish.  Twenty per cent of the Turkish population is Kurdish but Kurdish children cannot receive education in their mother tongue and clashes between the Turkish military and the PKK (the Kurdish Workers Party) have increased this year.

Six of the women were given bail soon after arrest, but nine remained in prison and this 4 October hearing was an application for their release.

All the women are accused of involvement with an underground Kurdish organization, the KCK (Union of Kurdish Communities). These are common charges against anyone who challenges the current government of the AKP (the Justice and Development Party) which has now been in power for 10 years under Recep Erdoğan’s leadership. The AKP’s increasing emphasis on conservative values and attitudes particularly toward women, and its championing of religion in education worries liberal Turks and Kurds.

Why is the Turkish government targeting KESK’s women members?
The KESK teachers’ union has conducted a strong campaign against the government’s education reforms which became law in March 2012 and the KESK medical union has fought for the right to collective bargaining.

In addition to this trade union determination, KESK supports positive discrimination policies and battles gender inequalities. Forming about half the membership, women are well represented in KESK. This activist and independent image of women in KESK contradicts the AKP government”s conservative view of women”s role in Turkish society.

Özkan Yorgun is blunt. He says you should be prepared for this treatment “if you are an opponent of the government, a democrat, if you are woman, if you are a member of KESK, or if you are a Kurd.”

Bedriye Yorgun’s case shows what is happening to KESK women activists, says Özkan. The prosecutor is demanding 45 years imprisonment. The breakdown is six charges of “propaganda” crimes carrying five years each and 15 years for membership of the KCK. The propaganda crimes include: twice phoning a TV channel; writing an article for a Kurdish TV channel; writing an article on health; and supporting mother-tongue teaching, which is illegal in Turkey. Also, she made a speech on International Women”s Day 2009 about the rights of women. Özkan Yorgun points out that all the evidence in her file relates to her union work and her activism in defence of women’s rights.  No evidence relates to her alleged links with the KCK.

From the loudspeaker bus, the deputy general secretary of the European Public Service Union (PSI/EPSU), Jan Willem Goudriaan brings roars of approval from the crowd when he uses Kurdish words in his speech. Later, in an interview, he points out that although Turkey has signed up to International Labour Organization conventions, it faces many legal proceedings for breaching them.

When the International Trade Union Confederation speaker, Stephen Benedict, brings greetings from the 175 million members of that organization, the roars of approval from the crowd increase.

Regitze Flannov, a teacher and a member of the NEC of the Danish teachers’ union, says, in an interview afterwards, that Turkey cannot have strong democracy without trade union participation.  She is worried because previous trials of KESK members in 2011 led to long sentences which are now on appeal.

In the afternoon the trial starts and the international delegation, KESK officials and relatives go into the court. The demonstrators remain outside chanting slogans of support. At 9pm, after an 11 hour demonstration, Lami Özgen, the president of KESK comes out and relays the judges’ decision.

Three women will remain in prison: Güldane Erdoğan, who is the women’s secretary for the No 2 Ankara Branch of the teachers’ union, Eğitim Sen;  Güler Eleveren who is the women”s secretary at the Municipal Workers Union, TÜM BEL-SEN; and Bedriye Yorgun, whose two sons were in court watching their mother.  Bedriye Yorgun and Güldane Erdoğan attempted to use Kurdish during the hearing but were refused permission. The other six detained women were to be released pending the trials of the 15 women.

As buses carried the 5,000 demonstrators back to cities across Turkey, three very courageous women trade unionists were returned to their cells in a Turkish high security prison. The global union federation Public Services International, its European arm EPSU, together with the ITUC and many other supporters continue to mobilise in defence of these workers.