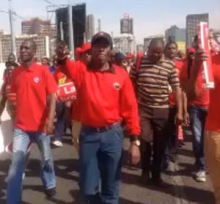 In South Africa, the wage talks between the public sector workers and the government, as represented in the Public Service Bargaining Council, have reached a deadlock.

The existing three-year agreement expired on 31st March and the government has refused to budge on its offer of a three-year salary increase package tied to the Consumer Price Index (CPI). The Government has accordingly proposed and maintained its position on the following salary increases: for 2015-2016, the offer is of 4.8% (CPI) plus 1.0%; for 2016-2017, it is CPI plus 0.5% and the same for 2017-2018.

In September last year, unions tabled a list of demands, including a 15% salary increase, a R3.000 housing allowance, the abolishment of the lowest-paid levels one and two, and the introduction of six months’ maternity leave and two weeks’ paternity leave.

Despite the fact that this year, workers will have to deal with an increase of 1% in income tax, 1% in the fuel levy and an electricity hike of 25%, the workers representatives have revised their claims. They reduced their requests to a 10% salary increase and a R1.500 housing allowance for all qualifying workers from level 1 to 10, but the government still refuse to negotiate fairly.

Labour had also requested a voluntary mediation in an attempt at arriving at an amicable and mutually acceptable resolution, but the employer instead chose the path of referring the issue for conciliation.

Public sector unions representated by COSATU, FEDUSA and NACTU last week rejected an offer of 5% which was increased from 4.8%.

The spectre of a public sector strike should be avoided as everybody will bear the brunt of its consequences. The 1.4 million public servants would have no other option than to go on strike and the prospect of a major strike in South Africa would affect Africa’s most advanced economy.

As global trade union federation representing over 465,572 working women and men who deliver vital public services in South Africa, Public Services International (PSI) appeals to the South African government to come back to the negotiating table with an offer that is reasonable and that shows that the government recognises the contribution that the public sector workers make in the provision of public services.

PSI urges the government to preserve the relations between labour and the government. PSI is concerned by the neoliberal economic policies being imposed on people all over the world by the IMF. The austerity agenda force-fed to the developing world by the IMF increases inequality and poverty. Workers should not be the victims of these neo-liberal policies adopted by government!