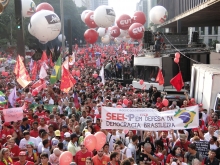 One of the highlights of the World Public Service Day, commemorated on 23 June, was the rally held in the centre of the city of São Paulo and organised by the National Confederation of Social Security Workers affiliated to the trade union centre CUT and by the São Paulo State Union of Public Sector Health Workers.

The rally, which was part of a Week of Global Action on Tax Justice for the Public Services, was attended by workers and leaders from these two unions. The aim was to debate the issue of tax justice, especially as it affects the health sector, and to denounce tax evasion, especially by transnational and multinational companies. The rally called on governments to spend tax revenues on public services and social protection programmes, and to eliminate inequality.

It was an all-day rally, during which workers distributed materials addressing public concerns about tax justice. Union leaders made speeches denouncing the way that tax evasion harms public health service users and workers who have to put up with precarious working conditions and poor labour relations. A play on the subject was also staged, which illustrated the enormous harm caused to the public. The street theatre drew a lot of attention from passers-by.

Union leaders highlighted the importance of tax justice in the context of government’s claims that it lacks funds to provide quality public services, even while billions of dollars are lost due to tax evasion and capital flight. The issue is especially important in Brazil given the way that the government of Michel Temer, who came to power in a political “coup”, is dismantling public social welfare programmes and labour rights.

For example, social expenditure has been frozen for the next 20 years, with the instrumentality of Act PEC nº 95/2016 which also introduced labour, social security and outsourcing reforms that are disastrous for workers and the most vulnerable segments of the society. The government has already abolished many rights and is gradually dismantling social programmes by curtailing expenditure for them.

The CNTSS/CUT, which represents social security workers in the public and private sectors, is active in the PSI tax justice campaign. The lessons learnt from this campaign are used to formulate strategies with affiliated unions and federations. On 11-12 April, social security union leaders attended a seminar on tax justice organised by PSI. The seminar, which was attended by leaders of several CUT affiliated unions, discussed the need for international tax reform to regulate tax evasion, which is holding back the investment of resources that could benefit economically-deprived sectors of society.

This article is an extract from the “Right to Health” newsletter issue 03/2017. Subscribe to the newsletter. Send us your stories.