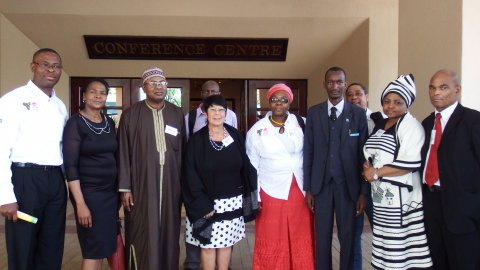 “African people have a proud history of fights against injustice, from colonialism to apartheid. So, do keep fighting against the injustices and inequalities of today, fight for quality public services, indispensable means to democracy and prosperity.”

To an audience of over 200 public sector trade union leaders from 33 countries, Ms Pavanelli said she was particularly pleased to see for the first time nearly half of women delegates attending.

“It would be a sad world, where half of the population was not fairly represented.”

However, she also expressed her frustration that delegates from Liberia, Sierra Leone and Guinea could not obtain a visa and participate in the Conference, as these are the three African countries most affected by the Ebola virus disease.

“Ebola has exposed the failure of a system that has challenged public governance of health care in Africa. It has shown to the whole world the importance of public investment in the health sector, of decent work conditions and of research against such diseases.”

Ms Pavanelli said that a major reason for such lack of investment is tax evasion, corruption and tax havens that are also widespread across Africa.

Paraphrasing the slogan of AFRECON “Solidarity, Strength, Service”, PSI General Secretary mentioned the current refugee crisis around the Mediterranean and called on Europe for more solidarity towards African and Middle Eastern countries.

“Public sector unions can play a role in conflict areas where violations of human rights take place, forcing many people to flee.”

Ms Pavanelli also praised the increasing strength of African and Arab affiliate organisations within PSI and their growing membership, underlining the need for independence from governments, for unity and solidarity between workers and unions.

In his welcome speech, Mr Sikalame Seitiso, Chairperson of PSI’s Botswana National Coordinating Committee from the Botswana Public Employees Union (BOPEU), pointed out that AFRECON is taking place at a time when African countries and public service workers are facing major challenges, first and foremost privatisation.

“Many political leaders are responsible for this, they let corruption erode our ability to address poverty and unemployment, and in the long run corruption cannot but prevent development.”

Mr Adeyemi mentioned the attacks on trade union rights as a reason for concern, as well as security threats to citizens and workers posed by terrorist groups from West to East Africa, from Boko Haram to Al-Shabab.

After the opening ceremony with the leaders of PSI, of Botswana trade unions and government officials, the conference went on with presentations about trade union rights in the public sector, union development and international cooperation.