The right to water is a fundamental human right. No life without water. 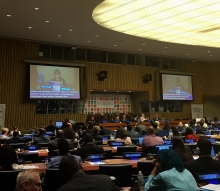 PSI General Secretary, Rosa Pavanelli, took the floor at the UN High Level Political Forum during the first global review of SDG 6, water and sanitation, emphasising that, rather than promoting failed PPPs, the SDG process should look at public-public partnerships that are ﬂourishing around the world.

The right to water is a fundamental human right. No life without water.

Water and sanitation services underpin our societies and can cause serious social and economic challenges when poorly managed and underfunded. Ensuring that people have access to safe, secure and affordable water is vital to ensure a decent life for all.

The push for greater private sector involvement in the implementation of SDG 6, ﬂies in the face of growing evidence that the privatization of water and sanitation has been detrimental, especially to the most marginalized and vulnerable communities in the world and that corporations tend to use monopoly power to generate excessive profits.

The shocking reality for people living in Flint, right here in the United States, shows that this is not just happening in developing countries.

Evidence also demonstrates that private investors have largely ignored the most underserved regions of the world while favouring more lucrative markets requiring less capital and promising greater returns. In 2018 in Jakarta, 20 years after privatization, the Supreme Court of Indonesia annulled the contracts with private companies operating in the city since citizens still did not have any access to drinkable water.

Avoiding the pressure to privatise requires providing alternatives to improve service quality, user access and management performance of existing utilities. This often involves improving governance and accountability. Directors and workers of public utilities must be selected on the basis of competence, not political connections. Staff must be able to form and join unions and negotiate working conditions, life-long training and career paths. Governance of utilities must also involve community leaders, service users and the broader public.

This is due in large part to strong public resistance to private control of local water and sanitation systems. Where water and sanitation have been privatized, remunicipalization or the return in public hands, has become an undeniable trend and often involves new forms of participation for workers and citizens. When the city of Paris took water back into public hands in 2010, services improved significantly. The city saved 35 million Euros in the first year and reduced tariffs by 8 percent.

While developing solutions for the financing and implementation of SDG 6, decision-makers must therefore acknowledge this sweeping trend - the hundreds of experiences of remunicipalization within the last 15 years provide evidence not only of private sector failures, but also of solutions for better public services.

Rather than promoting failed PPPs, the SDG process should look at public-public partnerships that are ﬂourishing around the world. Given the repeated references to ‘evidence-based’ policy throughout the SDG process, nobody can ignore the evidence coming out of communities that have resolutely rejected privatization. At a conference about the UN's Sustainable Development Goals unions called for an end to the privatization of water services and green energy solutions. A report featuring the General Secretary of Public Services International, Rosa Pavanelli.