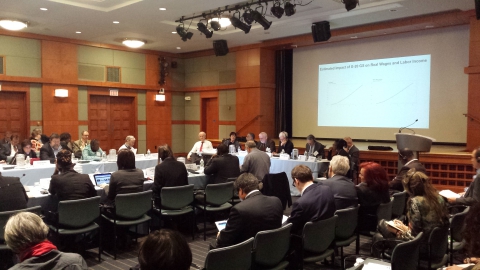 Economic models that promote labour flexibility and privatisation are destined to fail. This was PSI’s main message to the high-level meetings between the Global Union Federations, the World Bank and the International Monetary Fund, on 11 February in Washington.

PSI, 12 February 2015 -  “There are many reasons why public services are essential for economic growth, while other models promoting cuts in public spending and  favouring the private interest inevitably tend to fail.”

This is how Rosa Pavanelli, general secretary of Public Services International (PSI), addressed a panel discussion about “G20 economic growth modelling”, during the high-level meetings between the Global Union Federations, the World Bank and the International Monetary Fund, on 11 February in Washington.

“In circumstances of recession and under-employment, public sector spending has a clear stimulus effect,” said Pavanelli.

“We have known this for a long time and anyone who has witnessed the impact of austerity measures in Europe can acknowledge this today. Even the IMF has eventually reckoned the importance of public spending as a multiplier.”

“In addition to that, public services contribute to labour productivity, to less inequality, to macro-economic stability necessary for growth, and especially guard against shocks. The Ebola crisis is a clear example of the effects on the economy at large of not investing in public, universal health care services.”

PSI general secretary highlighted that IFIs are still promoting 'economic growth models' that aim to favour the private interest instead of protecting the general interest and common goods. Labour reforms that reduce workers’ rights, jobs stability, and fiscal stimulus that legalise tax avoidance for foreign investors, particularly multinational enterprises, have worsened the situation instead of boosting the recovery. Amongst those models, promoted also by the World Bank, the G20, the OECD, as well as the United Nations for Sustainable Development Goals, are the Public-Private Partnerships (PPPs).

“There is plenty of evidence that PPPs are more expensive and far less efficient, they often create corruption, causing a serious damage to the economy and to taxpayers, not to mention that they often do not help to protect the environment and do not ensure universal access to quality public services,” said Pavanelli.

At the discussion table, IMF economic counsellor Olivier Blanchard presented the latest World Economic Outlook, noting that despite a decrease in oil price and inflation, the Fund made further downward revisions to potential growth in 2015, especially in emerging markets.

“This will have implications for employment, with an improvement for labour markets, even if a large jobs gaps remains, with persistent low wages,” explained Blanchard.

According to William Spriggs, chief economist to the AFL-CIO, there is wide concern in the United States about scarce labour force participation and decreasing wages, with serious inequality consequences.

John Evans, general secretary of the OECD Trade Union Advisory Committee (TUAC), also stressed the urgency to intervene on employment and wages, “the actual question is how to start more public infrastructure investment and so boost growth, and how those measures can help wealth redistribution. In this regards, collective bargaining cannot but be seen as a resource and a positive factor.”

Hilma Mote, ITUC Africa, underlined the need for the IMF to support investment in infrastructure for development, especially in transport, energy and ICT in order to diversify the economy and increase productivity.

“I like the IMF call for structural reforms but for reforms that serve the needs and aspirations of the African people,” said Mote.

“Africa should stop feeding the growth of other countries at the expense of its own.”