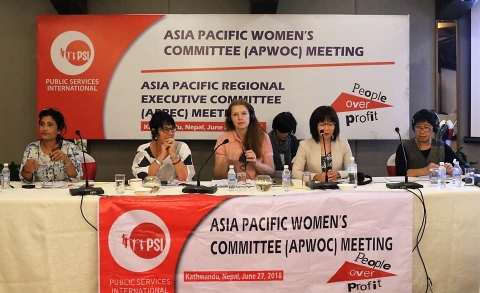 Public sector trade union representatives from across the Asia Pacific region met from 27-29 June in Kathmandu, Nepal. The meeting is part of the global union federation PSI’s five-year strategic planning to achieve a better world for all, one that places people over profit.

In addressing the meeting, PSI General Secretary Rosa Pavanelli stressed that “Workers and their communities around the world are experiencing the negative impacts of globalisation.  We are seeing public service provision undermined because governments lack adequate funding for quality public services. Yet at the same time we see multinational corporations making record profits year after year. This shows why we need to ensure, at a global and national level, tax justice laws. Our communities have a right to quality public services so that we can fulfil our fundamental human rights.”

Talking of the successful struggles of public services workers, PSI Regional Secretary for Asia Pacific, Kate Lappin, celebrated a union campaign that led to the Government of Philippines ratifying the International Labour Organisation (ILO) Convention 151 on Labour Relations of Public Services Workers, giving public sector workers the right to unionise. In contrast the meeting was deeply concerned to learn of the proposed Civil Servants Bill in Nepal. The proposed Bill would effectively deny public servants the right to organise and bargain collectively. The right to strike is also curtailed in this context.

“Nepal has been the site of the struggle for democracy and unions are pillars of this struggle,” said Kate Lappin. “Yet, their rights are under threat. PSI will support its affiliates in Nepal to lobby for the withdrawal of the Bill.”

A resolution was passed to this effect.

For international members of the delegation, the meeting was an opportunity to understand the working conditions of Female Community Health Volunteers (FCHVs).

“FCHVs play a fundamental role to provide basic health services where there are existing healthcare system gaps. Despite being called volunteers, they have targets, reports and their work is supervised. They are the radar of the healthcare system in the community. They deserve their rights as workers and PSI will support and amplify their struggle for justice unconditionally”, said Annie Geron, PSI's Asia Pacific Regional Executive Co-Chair.

The delegation met FCHVs at their work place during a field visit.

Subodh Devkota, PSI Nepal Coordination Committee Chair said, “Public sector workers are sometimes named as heroes when they lose their lives. We do not need heroes, we need workers with dignified lives and working conditions.”

To conclude, Pavanelli shared, “In Italy, like in Nepal, we face earthquakes regularly. I am impressed how 3 years after the massive April 2015 earthquake, the reconstruction is so advanced. We need to recognise the efforts of the government, the authorities and the workers that have ensured that lives were saved and reconstruction is taking place.”