"The public is losing its faith in public services" : Interview with Chadian Union Leader at ILC2018 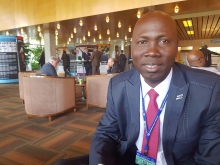 On the sidelines of the International Labour Conference, PSI is hearing stories of unionists from across the world, fighting for their most basic workers’ rights.

In Chad, workers are on strike again over unilateral cuts to salaries acros public services. One of the key causes of the current crisis stems from a shady, multi-billion dollar, petrol-backed loan from Swiss Multinational Glencore.

Could you describe the current situation in Chad - has there been any Progress since the last ILC?

In this moment I have to say that there is not much progress - in January, the President unilaterally cut the salaries of public service workers across the country. As a result, we carried out two months of Strike. On March 14th, unions came to an agreement with the President which, recognizing the financial crisis our country is in, accepted the salary cuts on the basis of his personal guarantee our proper wages would be reinstated from the month of July. Unfortunately, just last week, he reversed this decision and now says that salaires will not be reinstated until December. This has a resulted in a huge loss of trust and for this reason we have reinitaited the strike.

Can you discuss the role of Glencore in the crisis?

TheGlencore loan is not in the interests of the people. We don’t know where the money went and we were surprised when it happened. It’s far from transparent this loan. For IMF loans, despite their problems, at least there is normally a level of transparency. With Glencore there is no transparency, we, the people of Chad don’t know the real conditions or outcomes.

You were recently elected as union representative for the Initiative for Transparency in Extractive Industries. Can you discuss the importance of the fight for transparency for workers?

Thanks to PSI we managed to create links with Civil Society organisations, who support us as workers. SwissAId brought their experts into Chad and have started investigations into some questionable finance practices - in both the public and private sectors. Transparency is important because it helps us see whose interests are really being served. It also allows us to reveal to the public the real state of our country’s finances.

Public service workers can help in this fight for transparency and make sure that the government is working in the public interest. We are on the frontline of the fight for quality public services. We cannot be part of the problem, we need to be the first ones to raise the alarm. That said, it’s very difficult for whistleblowers - there are very real risks. But some colleagues have the courage and are willing to pass on information - and as a union we have the power to release it or pass it to partners.

Can you see a path out of the current stalemate?

We are not asking for a lot! We are not demanding a raise. We know that the situation is tough - but all we are asking for is to have our salaries back.  Unfortunately, right now people are losing their faith in public services - we are no longer valued as workers. Many people are leaving to other countries for jobs.This needs to end. We are willing to work with the government - if they are willing to respect a minimum level of trust.