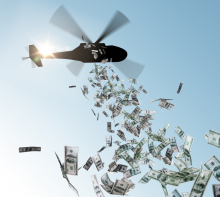 A new report, released by Public Services International, New Economics Foundation and Friedrich-Ebert-Stiftung highlights the need to fight for collective responses to inequality and austerity, rather than individualised cash payments.

The Report, titled UBI: A Union Perspective finds little evidence that a UBI scheme providing regular, sufficient, unconditional cash payments could be sustained in any country in the short, medium or longer term.

Sixteen practical projects were reviewed that tested different ways of distributing regular cash payments to individuals.  These included past, current and planned experiments across a range of poor, middle-income and rich countries.  They were considered alongside a growing body of literature covering economic simulations, policy analysis and arguments for and against UBI.

The cost of a sufficient UBI scheme would be extremely high, according to the International Labour Office, which estimates average costs equivalent to 30% of GDP in most countries. The current global average for total Government expenditure to GDP is 33%.

The report outlines how “If cash payments are allowed to take precedence, there’s a serious risk of crowding out efforts to build collaborative, sustainable services and infrastructure  - and setting a pattern for future development that promotes commodification rather than emancipation.”

“Government spending is inevitably about choices and compared to funding better quality public services, UBI simply doesn’t stack up. Providing a single mother with a cash payment to fend for her own in an inflated housing market is not as effective as providing quality public housing. Giving people more money to fill up their cars is not as progressive as offering free public transport.”

“We share the goals of UBI’s progressive supporters: to tackle inequality, end precarious work, to provide people with stability during times of change. But the best way to deal with these challenges is by fighting for better quality universal public services, and an end to brutal austerity poltiics and corporate tax dodging.”

The report concludes that ‘making cash payments to individuals to increase their purchasing power in a market economy is not a viable route to solving problems caused by neoliberal market economics’. There is ‘no evidence that any version of UBI can be affordable, inclusive, sufficient and sustainable at the same time’, and campaigning for it threatens ‘to divert political energies - as well as funds - from more important causes’.

The report was made possible thanks to funding from the Friedrich-Ebert-Stiftung (FES), a partner of PSI and the global labor movement.