PSI Interamerica Regional Conference: The Future of Work and Ending Violence and Harassment in Public Services

More than 90 trade unionists from Latin America, Canada and the Caribbean met to discuss issues including challenges for trade unions and workers in ongoing debates on the future of work, the impact of technology on work and the ILO Convention on Violence and Harassment in the World of Work. A strong gender analysis was integrated into every one of these topics.

More than 90 trade unionists from Latin America, Canada and the Caribbean participated in PSI’s Regional Conference "The Future of Work & Ending Violence and Harassment in the Public Service" between November 5 and 7 in Santiago, Chile. Carolina Espinoza, Southern Cone representative on the Interamerican Regional Executive Committee of PSI (IAMREC), Jocelio Drummond, PSI Regional Secretary, Mabel Batista, specialist in workers activities at the ILO and Chile’s Minister of Labour and Social Security, Nicolas Monkeberg all participated in the opening of the conference. 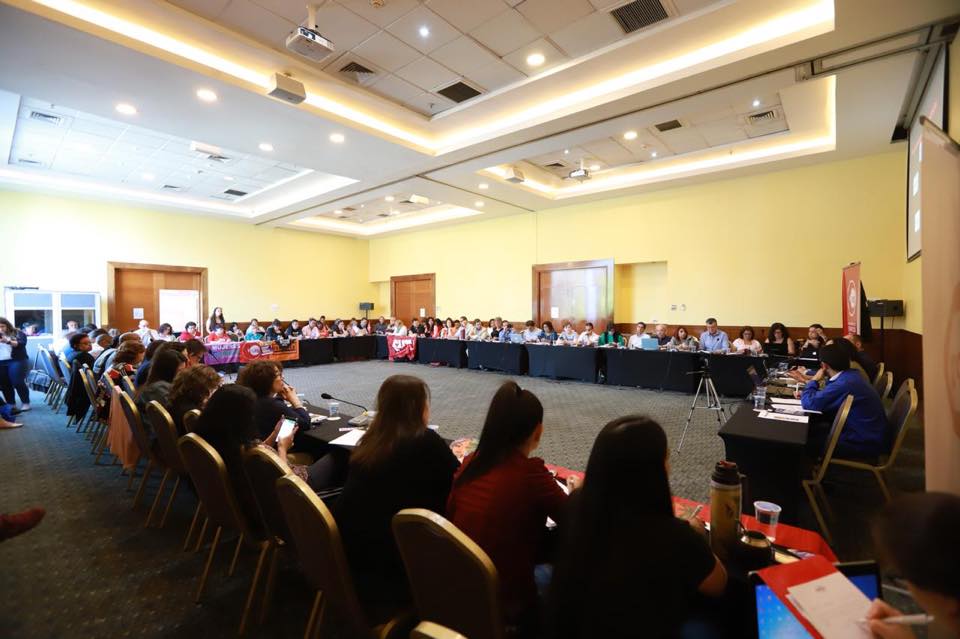 The first panel presented challenges for workers and their unions in ongoing and upcoming debates about the future of work. Panelists presented preparatory updates and a strategic union evaluation of the centenary (2019) debates of the ILO. The panel was introduced by PSI General Secretary Rosa Pavanelli, who emphasized the importance of highlighting public workers in the official document on the future of work. Other panelists included Jacob Velasco of the ILO; Barbara Figueroa, president of the national Chilean trade union central CUT; Marcelo Di Stefano, member of IAMREC; and Julio Fuentes, General Secretary of the Latin American and Caribbean Confederation of State Workers (CLATE).
This panel integrated debates about the future of work in the framework of second-generation human rights and the role of public services in the construction of equality. Also, the future of work and its role in guaranteeing the realization of sustainable development and the fulfillment of the Sustainable Development Goals (SDG) was discussed in detail. PSI’s Global Representative for Gender, Verónica Montúfar referred specifically to the role of public services and the role of public sector workers in ensuring that sustainable development is inclusive and respects labour rights.
The second panel discussed the impact of technological changes, new forms of work and the challenges of the fourth industrial revolution in the context of debates about the future of work.
In the third panel of the second day of the conference, a sectoral panorama on the Future of Work in Public Services was presented. Changes in government policy and privatizations were analyzed at the sectoral level, and some challenges were posed regarding union organizing, unity in the union movement and regional articulation. 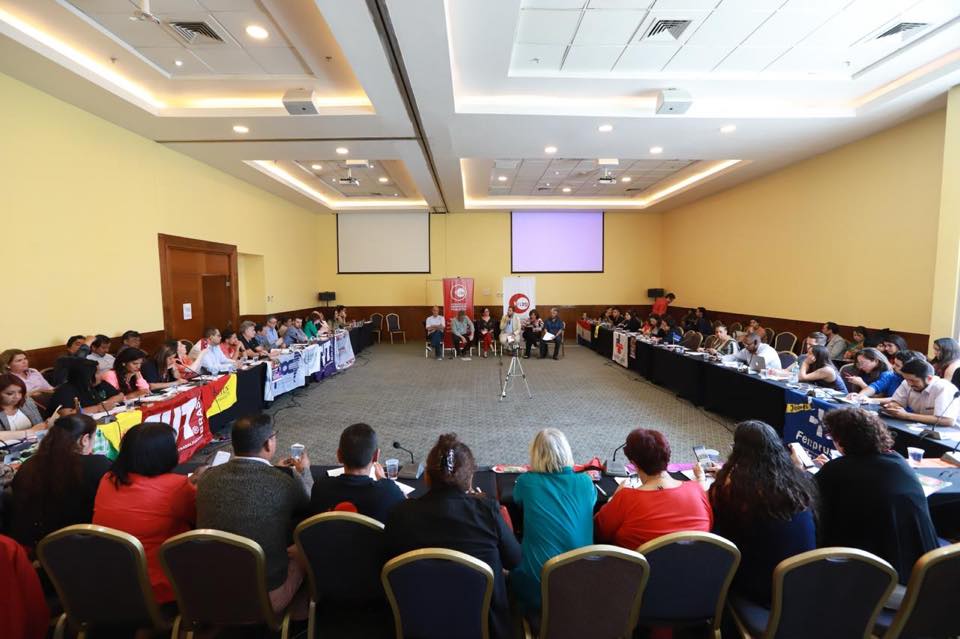 “We categorically declare that there is no future of work without discussing the present world of work. There is no dignity at work in the future without dignity in the present. We support the immediate promotion of decent work, the effective fulfillment of the International Labour Conventions, and respect for human and labour rights at work for everyone, all over the world ... It is fundamental to state the centrality of public services as a response to citizens’ access of employment and decent work. Without public services that provide the material source for realization of their fundamental human rights, there are no guarantees for integration into the labour market under equal conditions, "says the statement on the future of work.

In turn, the statement on violence and workplace harassment states:

"We assume with conviction and pride that in the current moment women of the international trade union movement have undertaken to create an instrument that addresses gender-based violence. The current moment is the synthesis of struggle that has led to debate and the possible adoption of a Convention and Recommendation to address Violence and Harassment in the World of Work at the International Labour Organization (ILO).  These efforts are premised on the notion that violence is a transversal and systemic factor in the world of work.

The debate about violence in all its varied manifestations has expanded in form and content to the point where it has transcended its status as a ‘gender issue’ to become a priority for the entire union movement. This is in addition to the fact that we are active and connected in national and international political contexts of attacks on our rights against which we have fought continuously and even lost lives. The historic responsibility of making this instrument a reality in normative terms within the framework of the ILO's Centennial (2019) debates puts us before the International Trade Union Confederation (ITUC), the ILO and the rest of the world as the Workers' Group, as Global Unions and as PSI. We have an excellent opportunity to recover the political initiative and move to the counter-offensive in the debates about the world of work while maintaining our capacity for both dialogue and mobilization."

Declaration on the future of work: english / español

Declaration on ending violence and harassment in the world of work of public services: english / español

See the photos of the conference: here, here, here and here.