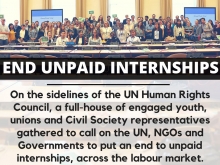 Over one hundred engaged youth, unionists and civil society representatives met on the sidelines of the Human Rights Council at the PSI event "How Unpaid Internships Undermine Human Rights, to call on the UN, NGOs and Governments to put an end to unpaid internships, across the labour market.

Participants at the event highlighted how unpaid internships are rapidly increasing in a range of sectors including the media, the arts, and some parts of government and international service. A significant concern is that they are actively replacing entry-level jobs, limiting labour market access to those who can somehow afford to work for free, usually with parental support, and therefore exacerbating existing inequalities.

Ian Richards, head of the UN Staff Council, discussed how supposed budget problems at the UN were a weak excuse to not pay the organisations thousands of annual interns.

"If they can somehow find $1billion to pay for Umoja, a computer system that was supposed to cost $200 million, then I simply do not believe that they can't find the money to pay the interns. This is a question of political will," Richards said.

Paying all the UN's interns a living stipend, simmilar to that provided by the ILO, would cost the organisation less than $20 million per year. Unpaid interns constitute an increasingly large proportion of the UN's workforce, with a dramatic 10% increase in intern numbers in the past four years.

Participants also discussed how poor quality internships are becoming an ‘eyesore’ for the NGO and International sector, which threatens to undermine the image and goals of organisations standing up for human rights. Finally attendees shared ideas on how we can best push for change and lobby organisations and employers, both publicly and diplomatically, to implement better policies.

Jean- Claude Vignoli, from Geneva based NGO UPR Info, said "there is no longer any reasonable excuse not to pay your interns, and NGOs need to recognize this."

The event also saw invovlement from other NGOs committed to improving intern conditions, including the International lesbian, gay, bisexual, trans and intersex association and DOCIP.

However, speaking in Geneva in the days following the event, outgoing UN General Secretary Ban Ki Moon made some worrying comments about intern activists. When asked by a student if the UN would listen to the concerns of vocal activists and address its unjust internship policy, Moon told the student "I hope you're not one of them."

The comment is particularly worrying coming from a leader like Moon, as interns already feel intimidated about speaking out and the precarious nature of their employment, with no contractual rights or access to remedy, limits their ability to organise and protest for improved conditions. Furthermore, Moon’s comments stand in stark contrast to his own statement on World Youth Day 2015, when he said “I am calling on young people to speak out, and I am urging leaders to listen.”

Moon then attempted to excuse the UN itself from blame, saying that only Member-States can end the unpaid policy. However internships at the UN are actually defined by an Administrative Instruction, written by the UN Secretariat, which UN leaders themselves have the full power to change. The Council of Global Unions, representing over 200 million workers worldwide, recently endorsed a letter to Moon, calling on him to make a proposal on payment for interns. Moon has yet to respond to the letter.

Rosa Pavanelli, PSI Secretary General recently strengthened the call for change, saying “How can we even begin to address the issue of rising precarious work in other sectors when the UN, the birthplace of human rights, is itself exploiting or excluding thousands of young people per year through unpaid internships.”

Intern activists are hoping that Antonio Guterres, the next UN Secretary General, will commit to ending unpaid internships within the UN's own halls and push for the reinstatement of workers’ rights for young people across other sectors too.

PSI is commited to standing up for young workers, fighting for an improvement in their conditions and is a proud member of the We Pay Our Interns coalition.