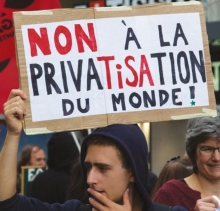 On the very same day the French government asked the EU to withdraw from the TTIP negotiations, two PSI partners in the struggle against TiSA, Attac Norway and Global Justice Now, launched the campaign briefing “A blueprint for global privatisation – Why we need to stop the Trade in Services Agreement".

The document which reminds TiSA could be even a greater threat to public services than TTIP - as unlike most trade deals it is about services, not goods - adds to publications like TiSA versus Public Services and The Really Good Friends of Transnational Corporations Agreement, released by PSI in 2014.

The briefing PSI is pleased to promote warns that TiSA "has serious consequences for things that have little to do with trade, affecting areas like labour rights, banking regulation and whether public services like electricity and water are run for the benefit of the people or by profit-making multinational companies”.

TiSA is fast becoming a mainstream issue thanks to PSI and its allies' work. Last week, both PSI and Global Justice Now were quoted in The Independent in an article titled "The new TTIP? Meet TiSA, the 'secret privatisation pact that poses a threat to democracy'".

"The TiSA negotiations were held behind closed doors for about 18 months until they were publicly revealed by the global trade union group Public Services International (PSI)", the article says.

PSI and its allies' preoccupations about the effects of TiSA on privatisation of public services were also recently in the news.

The new brief calls attention to the fact that TiSA “is not so much about trade, but about allowing multinationals to provide services across borders”, since, for example, “you cannot really transport a hairdressing appointment across the Atlantic Ocean, though you can transport a hairdresser (which is one of the ways TiSA deals with trade in services)”.

In short, continues the briefing, “much of the danger in TiSA lies in the fact that it turns many public services into commodities to be run for the benefit of business, rather than in the interest of people who need services like electricity, healthcare and transport”.

According to the brief the five main concerns about TiSA are: